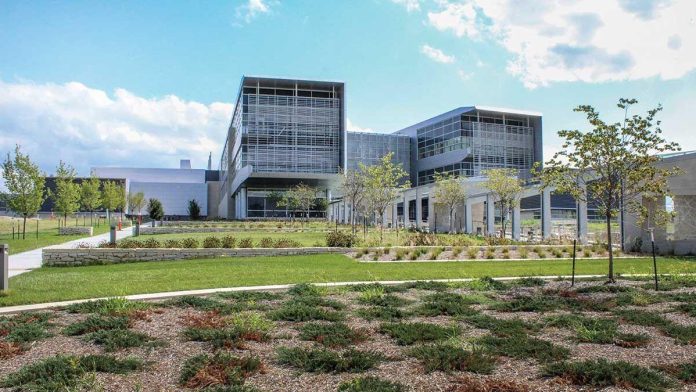 At the new National Bio and Agro-Defense Facility in Manhattan, Kansas, researchers and veterinarians will take on the animal disease challenges facing agriculture.

The facility’s director of communications, Katie Pawlosky, says it will have the country’s first biosafety level-4 laboratories capable of housing large livestock, providing the maximum level of biocontainment as researchers study animal diseases and develop vaccines.

The NBAF will focus on three areas: foreign animal diseases, emerging animal diseases and zoonotic animal diseases, which are those that can also infect humans. The new facility will eventually replace the Plum Island Animal Disease Center in New York, which has been the site of animal disease prevention and control studies for over 65 years.

“Foreign animal diseases often look very similar to domestic diseases,” she says. “There often are only subtle ways to differentiate.”

About 70% of emerging animal diseases are zoonotic, Pawlosky says, so having a top-level biocontainment facility to support research is important for agriculture but also the general population. She says it will be just the fifth biosafety level-4 lab capable of handling large animals in the world.

“It just shows we’ve got to be ready for this,” she says.

Pawlosky says researchers at the facility will look at a variety of animal diseases, although some of the top priorities are familiar concerns for producers, including foot and mouth disease, classical swine fever and African swine fever.

Chris Rademacher is an Extension veterinarian and a clinical professor at Iowa State University. He says vets and producers deal with seasonal disease challenges, even if the particulars of the diseases might change over time due to genetics and diet changes.

“Endemic disease is always a little bit cyclical, a little seasonal,” he says.

Rademacher says porcine reproductive and respiratory syndrome, or PRRS, is still the most economically impactful disease producers currently face. With the virus evolving, it now lasts longer into the summer than it used to.

“We’ve been fighting PRRS really for the last 30 years,” he says. “…We now tend to see it persist a little bit into the summer.”

Of course, the threat of African swine fever also looms as the disease gradually spreads in other parts of the world.

“We’re trying to work with and educate producers on the threat of African swine fever,” he says.

In addition to preparation, the industry is also working on prevention, collaborating with the U.S. government and customs officials to try to keep the disease out.

Rademacher says part of the preparation efforts include implementing a swine health improvement program, a voluntary, producer-led program that includes state and federal governments. This program sets biosecurity and health standards, providing assurance for trading partners, with the goal of getting U.S. pork to export markets as much as possible after a potential ASF outbreak. He says the National Poultry Improvement Plan is an example of this type of program working, as it has helped keep export markets open to U.S. poultry despite avian flu challenges.

It is hard to say if an ASF outbreak in the U.S. is inevitable, or if it can be avoided.

“That is the most common question that I get, and my answer is I just don’t know,” Rademacher says.

Still, he says prevention and education efforts are the best path no matter what. He says ASF can look like an endemic disease and takes hold slowly, taking weeks before a lot of deaths start happening.

While there is not yet a vaccine for ASF, there is a vaccine for foot and mouth disease. Rademacher says the USDA is working to make sure the vaccine is widely and quickly available if there is an outbreak, with Farm Bill funding.

“They put in money to expand the foot and mouth disease vaccine bank,” he says.

Corinne Bromfield, a veterinarian who also works for University of Missouri Extension, says ASF continues to be a key challenge.

Bromfield says having a written biosecurity plan is valuable, even if ASF never makes it to the U.S.

“The preparation we put in wouldn’t be wasted, even if we don’t get the disease,” she says. “It could help even with the diseases we have here.”