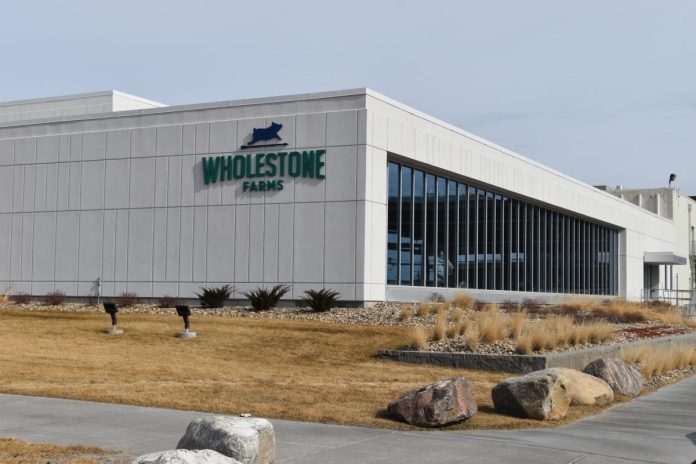 ulling up to the Wholestone Farms plant in Fremont, Nebraska, something significant seemed to be missing.

Hog processing facilities are known for their odorous nature, but the air that day was fresh and clear, even with a slight eastern breeze. Even the inside of the plant was devoid of foul smelling air.

Smell has been one of the top concerns raised by opponents of Wholestone’s second plant, which is set to open in Sioux Falls, South Dakota in 2025.

A group known as Citizens for a Sustainable Sioux Falls organized opposition to the new plant off of Interstate 229 on the northeastern edge of the city. Potential odor, along with traffic and water issues, are among their concerns.

The group petitioned, collecting over 10,000 signatures from Sioux Falls citizens to put the matter on the ballot. In November voters will decide whether new slaughterhouses, not just Wholestone, should be allowed to be built within city limits.

The proposed measure would not impact existing packing plants or expansion of those. The Smithfield plant could continue operating under those rules. Wholestone is looking to do the same by building a small butcher shop on site before November and expanding from there.

In a talk during the Ag United luncheon last winter, Luke Minion, Wholestone’s chairman of the board, who is a resident of Sioux Falls, said Sioux Falls was deliberately chosen as the company’s expansion site after asking then Gov. Dennis Daugaard for suggestions of where to build.

“We combed all of South Dakota. It’s pretty hard to locate a plant that needs 2,000 team members anywhere but Sioux Falls,” Minion said.

It came down to labor.

Minion said even with the Sioux Falls population, finding labor will be its own unique challenge, because it’s difficult to fill positions everywhere. The company hopes a starting wage of $20.50, as it offers at the Fremont plant is an effective way to lure employees. Along with that, the company offers a 6% match on all 401Ks and fully covered health insurance.

“We’re thankful to be fully staffed at our facility in Fremont. We never missed a day of harvest during COVID. We’re the only pork plant in the United States that can say that,” Minion said.

Katie Sinclair, vice president of export sales, marketing and research and development at Wholestone, said the company is aware there will be challenges but they believe the positives of a new plant outweigh any negatives.

“It’s really short-sighted,” she said. “But that’s how we improve. That’s how we get better school systems. We get improved hospitals and health care and other stores,” she said.

The company is prepared to exceed the public’s expectations, she said.

She acknowledged that while pork processing plants of old did create strong smells, modern technology does a tremendous job mitigating the odor.

When it comes to controlling plant smells, it all comes down to the rendering, which Sinclair said is an important part of the processing because it utilizes the pieces of the hog that aren’t sellable, giving it a purpose and revenue.

“We use everything but the squeal,” Sinclair said.

“But it does tend to be the thing that allows a lot of aroma into the community,” she added.

Sinclair said both the Nebraska and South Dakota plants are getting significant investments to their rendering facilities, particularly by installing wet scrubbers and oxidizers, which work together to eliminate most aroma the rendering might create.

“By the time the exhaust comes out, the top is oxidized and cleansed. It’ll pretty well eliminate odor inside the plant and virtually eliminate odor outside,” he said.

Sinclair and the Wholestone team recognize that even with the added technology, there may occasionally be a faint aroma.

“I can’t promise it will never smell,” she said.

Sinclair said the dedication to mitigate odor as much as possible comes from one of Wholestone’s five pillars of sustainability – being good partners in the community.

The other four pillars are animal welfare, caring for the environment, food safety and quality and good employee practices.

The company advocates for plant employees to be actively involved in the community of Fremont, and plans to do the same in Sioux Falls. Workers are provided volunteer hours of paid time off to be involved with organizations such as FFA, their local church or schools.

Wholestone’s 200 farmer-owners, many of whom living within a 50 mile radius of the upcoming Sioux Falls plant, are also encouraged to be involved in their own communities and are required to instill sustainability practices.

Peggy Greenway and her husband Brad have been involved with Wholestone’s affiliate company, Pipestone Systems, since 2006.

The couple owns and operates Greenway Pork near Mitchell, South Dakota, where they raise 14,000 pigs each year.

Greenway said each Wholestone farmer is required to fill out information on sustainable practices, including about pounds of feed and gallons of water used, kilowatts of electricity, how manure is used and how much land is fertilized with the manure. Representatives visit each farm regularly to make sure proper practices are being followed.

“Sustainability is extremely important to us as farmers, and we realize that consumers are interested in knowing that,” Greenway said.

As a farmer, she appreciates knowing that Wholestone is committed to both updating the Fremont plant, which was retrofitted from an old Hormel plant, and making sure the new Sioux Falls plant is using the most updated technology and equipment possible.

“That makes me happy as a farmer-owner because I want the employees there to be proud to work at Wholestone farms,” she said.

Sinclair said the company does everything they can to make sure their employees feel respected and valued.

At the Fremont location, the company installed a cooling system last summer that keeps the temperature at 75 degrees or below, even on the “hot side” where the animals are first euthanized in state-of-the-art CO2 chambers.

Sinclair said she hopes Wholestone current and potential employees know that the company is a place where they can build a career, rather than just come to a job.

“There’s a lot of people in this business that started off cutting toenails off a pig or removing the bone and now they are superintendents or supervisors. There are CEOs that have started off in an entry level position,” she said. “This is an industry that allows people, if they are honest and have integrity, dedication, work hard and are a good team player, to have a great career.”