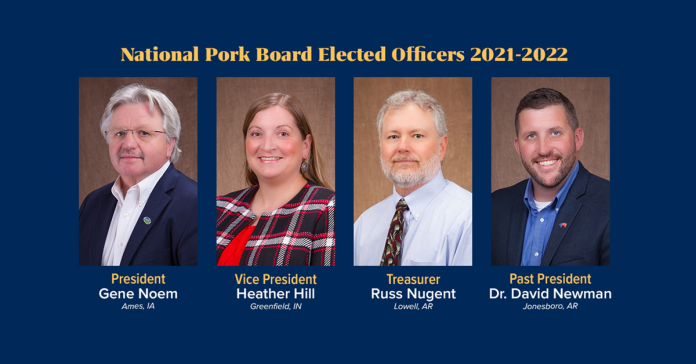 Gene Noem, a pork producer from Iowa, was elected to serve as president of the National Pork Board for the 2021-2022 term. The National Pork Board’s 15 producer directors represent America’s 60,000 pig farmers, who pay into the Pork Checkoff – a program funding research, promotion and education efforts for the benefit of the whole industry.

“I look forward to leading the Pork Checkoff and representing America’s pig farmers,” said Noem. “Rising feed costs, ongoing pandemic recovery, and the lingering threat of African swine fever (ASF) are just a few of many challenges facing our industry. That said, I remain optimistic about what’s ahead for U.S. pork.”

Priorities for Noem’s term as president include advancing the Real Pork trust and image brand to tell a more complete farm-to-fork story and protect producers’ freedom to operate; diversifying export markets; and continuing efforts to keep ASF and other foreign animal diseases (FAD) out of the country and providing tools such as AgView for producers in the event of an FAD.

“Despite the impact of COVID-19 on our industry, we have strong momentum in our favor. Especially after the successful launch of Real Pork and AgView,” said Noem, who finishes hogs at JMG Farms in Howard County and also manages the contracted gilt multiplication for PIC North America. “The Checkoff will continue to deliver on these and other priorities, identified in the industry’s annual planning process, for the common good of all pork producers.

In addition to Noem, other members of the Pork Board’s 2021-2022 executive officer team include Vice President Heather Hill, from Greenfield, Indiana and Treasurer Russ Nugent, from Lowell, Arkansas. David Newman from Jonesboro, Arkansas will serve as Past President in an ex-officio status.

Other producers appointed by U.S. Secretary of Agriculture Tom Vilsack to serve terms on the Pork Board include: