By I. Heinzl and S. Regragui Mazili

In contrast to humans, piglets do not receive any maternal immunoglobulins via the placenta. It is therefore of vital importance for these young animals to receive maternal antibodies via the colostrum as soon as possible after birth. Otherwise, they are more vulnerable to illnesses in their early stages of life.

In this article, we look in-depth at how the immune system works and which role antibodies play in it.  We then consider why immunoglobulins from the egg (IgY) might potentially be a powerful tool for supporting young animals immunologically, allowing producers to maintain young animals’ health and to promote their performance.

How the immune system defends the body: three barriers

The immune system aims to prevent pathogens such as viruses, bacteria, and fungi from entering the body or to eliminate them when they have already entered. Furthermore, it seeks to prepare the body for quicker reactions, in case of subsequent infections, by building an immunological memory.

Generally, in case of an attack by pathogens, there are three barriers against the “enemy” (Figure 1). 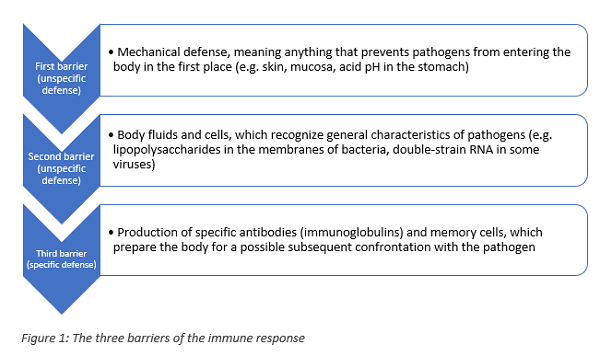 First barrier: the immediate, physical defense upon contact with pathogens

The animal body has several anatomical features that prevent pathogens from entering in the first place, such as cilia and mucus. Skin, intestines and nose lining are colonized by a community of beneficial micro-organisms that form a physical barrier against pathogens. Other barriers include the urinary system, the acid pH of the stomach, as well as tears and saliva, which contain antibacterial lysozymes.

Second barrier: the unspecific, native defense that does most of the work

If the mechanical mechanisms of defense were not successful, the unspecific, innate immune defense enters into play (Murphy and Weaver, 2018, 47ff.). At this stage, the body needs to differentiate between “known” and “alien” agents, and between “potentially harmful” and “harmless” ones.

To identify alien, potentially harmful agents, the unspecific defense looks for so-called PAMPs (pathogen associated molecular patterns). These are general characteristics often displayed by pathogens, such as lipopolysaccharides in the bacterial membrane or double-strained RNA in viruses. Everything that shows PAMPs is heavily targeted.

The unspecific defense can be further divided into the humoral and the cellular defense. The humoral defense consists of substances dissolved in the body fluids, such as enzymes, reactive oxygen compounds, signal molecules and a whole cascade of proteins. Some of these substances kill pathogens directly; others “mark” the pathogens and “call for” the help of leucocytes.

The cellular defense consists of different leucocytes, also known as white blood cells (because they do not contain any red hemoglobin). The main task of leucocytes is the defense of the body against pathogens, hence many leucocytes are capable of phagocytosis (the ingestion of other cells). To prevent phagocytes from accidentally ingesting the body’s own cells, these own cells are marked with the so-called major histocompatibility complex (MHC). This acts as a red flag, saying “I belong to the body!”.

The cellular defense consists of:

The monocytes, as well as their macrophage and dendritic cell “offspring”, are the bridge to the next step, the specific defense. When these phagocytes digest pathogens, minuscule protein structures (antigens) of the pathogens remain. These antigens are unique to each pathogen. During a process called antigen presentation, the antigens are tied to the cell’s MHC and transported to the cell surface. This triggers the production of specific antibodies, the immune system’s third barrier.

The specific (also called adaptive or acquired) immune response kicks in a few days after contact with specific pathogens and is mostly carried out by lymphocytes called T and B cells (Murphy and Weaver, 2018, 177ff.). They are active at the cellular and the humoral level, respectively.

T cells possess receptors on their surface through which they can recognize the antigens presented to them by phagocytes. What they do subsequently depends on the subtype of the T cell:

B cells also possess receptors through which they can recognize antigens. Once they spot an antigen (and T helper cells “confirm” that an immune response is required), they divide and mature into so-called plasma cells. Plasma cells, in turn, secrete plenty of antibodies (or immunoglobulins) into the bloodstream and the lymphatic system. Antibodies are protein structures that lock onto and neutralize antigens through different mechanisms.

The chemical reaction between antibodies and antigens is the body’s most powerful immune response through which it can protect itself from pathogens and their toxins. Antibody production continues for several days to remove the antigens, and antibodies usually remain in circulation for a few months.

Moreover, certain T and B cells memorize the first attack of a pathogen and turn into memory cells. The T memory cells CD4+CD8+, for instance, match the antigens from certain past, latent, and particularly persistent viral infections. This immunological memory, created by acquired immunity, can be thought of as a library of antibodies that the body adds to whenever it deals with a new pathogen or receives a vaccine. In case of a subsequent contact with the pathogen, the right antibody “model” already exists and mass production can start up very quickly.

Building one’s immunological memory takes time. A lot of new-born animals are in a vulnerable position: they have not had time yet to acquire immunity of their own, but they are also particularly fragile and susceptible to being attacked by commonly occurring pathogens such as corona and rotaviruses, E. coli and clostridia. The toxins that E. coli and clostridia, for instance, release, may cause diarrhea, edema, endotoxic shock, and even death.

To be protected during the first critical days of their lives, new-born animals thus need to receive a foundational stock of antibodies (passive immunity) from their mother. Humans receive maternal immunoglobulins via the placenta. Piglets, because a sow’s placenta is constructed differently, are dependent on receiving them through the colostrum after birth. If this is not the case – due to inadequate quantity or quality of the colostrum – they need to receive immune support in a different way.

Egg-yolk antibodies have been proposed as a powerful tool for supporting young animals during the critical period after birth. These special proteins support the colostrum supply and guarantee that every animal in the herd has some degree of protection. This protection mostly takes place in the gut. The IgY recognize and tie up pathogens and render them ineffective.

In 2009, research at the National Veterinary Research Institute in Pulawy, Poland, was conducted to probe this hypothesis. The objective of the trial was to evaluate whether an oral application of egg immunoglobulins would have a quantifiable, positive influence on the immune system of the piglets. Different immunological parameters were measured, including different types of leucocytes.

The test consists of 6 litters with 67 piglets in total divided into two groups. The control group (n=32) received the prophylaxis customary on the farm; the trial group (n=35) additionally received a product based on egg powder (EP)[1], applied at the inclusion rate recommended by the producer. Blood samples were taken on days 0 (before application of the product), 7, 14, and 28. They were analyzed with respect to the percentages of different types of lymphocytes.

For the group receiving egg powder, the number of leucocytes in peripheral blood was significantly elevated compared to the control group on the 7th day of life (table 1). The amounts of lymphocytes and monocytes – indicators for the specific immunological defense – were also significantly increased on day 7, whereas the total amount of granulocytes – indicator for the innate, unspecific immune defense – remained constant. Hence, already during the first days, the piglets supplied with EP disposed of a higher level of adaptive (specific) immune defense, compared to the animals in the control group. In addition, there was a significant increase in the number of CD4-positive (CD4+) and CD4-CD8-double positive (CD4+CD8+) T cells in the EP group, compared to the control animals, indicating an active stimulation of the immune system.

Except for CD4+CD8+ T cells (which remained elevated in the EP group), on day 14, the differences in cellular immune response were no longer significant. This is most probably the case because by that time the immune system of the control group had activated its own protective response. The EP product therefore supported the young animals precisely when it was necessary, during the critical first days of life.

Table 1: Hematological parameters measured in piglets after prophylactic application of an egg powder based product (EP1) 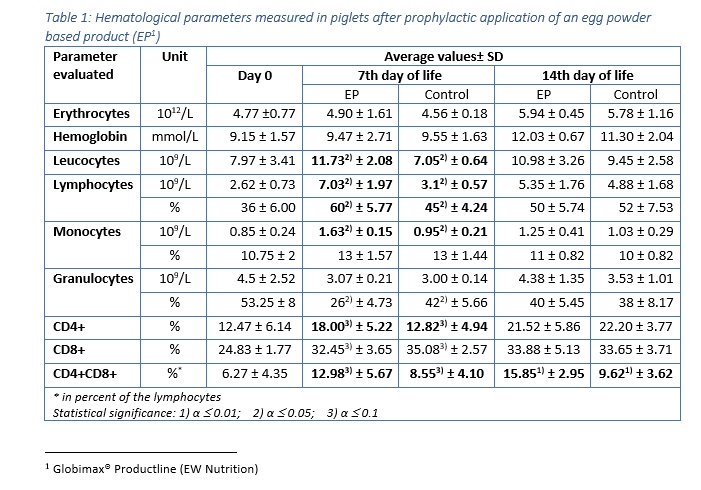 The improvement of immune status, as indicated by the presence of the specific immune cells, was confirmed by the results for the incidence of diarrhea and mortality (table 2). The animals of the control group showed a nearly 1.5 times higher incidence of diarrhea and a 1.6 times higher rate of mortality. Another explanation of these results could be the mode of action of egg immunoglobulins: by neutralizing the pathogens directly in the gut, they prevent them from causing diarrhea in the first place.

In conclusion, this trial demonstrates that immunoglobulins from eggs (IgY) effectively support the immune system of piglets during the critical period of the first days of life.

Thanks to the stimulation of the young animals’ specific immune defense and the direct neutralization of pathogens in the gut, the incidence of diarrhea – one of the main causes of losses during the first weeks of life – decreases. Hence, mind the immunity gap: providing piglets with a suitable egg powder based product sets them up for long-term health, growth, and performance.