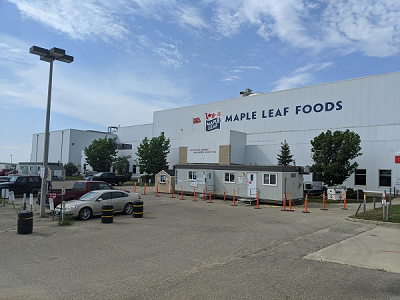 The Mississauga, Ont.-based food giant said Tuesday it has completed construction on a $182-million expansion to its prepared meats plant in Winnipeg, which the company says will bolster its bacon production capacity.

“Our vision to become the most sustainable protein company on earth applies even to our very best convenience food, which includes delicious pre-cooked bacon,” said Michael McCain, president and chief executive officer of Maple Leaf Foods, in a release. “This state-of-the-art facility will deliver sustainably made cooked bacon products from meat humanely raised and without antibiotics, made by a carbon neutral company. We are really proud of this.”

While construction may be completed, the so-called Bacon Centre of Excellence isn’t up and running just yet. The company said production will ramp up over the coming months. Once sizzling at full capacity, the expansion is expected to bring an additional 350 jobs to the plant, bringing total employment to 1,900 positions.

Ramping up bacon production could prove lucrative for Maple Leaf, as the price for a 500-gram package climbed to a record high last month at $8.24, according to Statistics Canada, as the pandemic continues to disrupt supply chains all over the world.

Prior to the pandemic, in the early months of 2020, bacon had been hovering around $7 for a 500-gram package.

Maple Leaf produces eight different bacon brands. Almost half of all Canadian households purchased one of its bacon products in 2021, the company said.