Lift Up America and the Cleveland Indians are teaming up with Tyson Foods for the tenth consecutive year to help bring the gift of food to more than 30 Cleveland-area pantries and hot meal programs this Friday, September 16, at Progressive Field.

The Indians organization will host a press conference beginning at 12:00 p.m., along with employees from Tyson Foods, Lift Up America, Insurance Partners Agency, and the Greater Cleveland Food Bank followed by the food distribution scheduled to last until 1:00 p.m. Indians radio personality Jim Rosenhaus will emcee the event while presenting sponsor Insurance Partners will lead teams loading frozen product into community agencies’ vehicles.  Matt Dolan, a representative from Cleveland Indians Ownership and Indians Alumni Paul Shuey will be in attendance.

“Hunger is a basic need that goes unmet for many families in Northeast Ohio. The Cleveland Indians are proud to host this food drive to combat hunger as part of our commitment to the region’s communities,” said Rebecca Kodysh, executive director of community impact for the Cleveland Indians.

Since 2004, Lift Up America has partnered with corporations, pro sports teams and non-profit organizations to help communities in times of need. “We are excited to work with the Indians, Tyson Foods and Insurance Partners Agency again this year. Through these efforts in fighting hunger, we hope that we can serve as an example for our youth and encourage the next generation to be Ambassadors of Compassion,” said Eric Hannah, president of Lift Up America.

“We want to make a difference in the lives of people struggling with food insecurity,” said Matt Pakula, Tyson Foods’ senior manager of corporate social responsibility. “To show our commitment to hunger relief, Tyson Foods has pledged $50 million in cash or in-kind donations over the next five years in the fight against hunger.”

“Our communities and people are intertwined and depend on one another. Each of us has or will experience difficult times. We are blessed, grateful, and honored to be able to help others. We challenge every organization and person to do what they can.” says George Dadas, president of Insurance Partners Agency, food drive champion and presenting sponsor since 2010.

A holistic approach to swine production 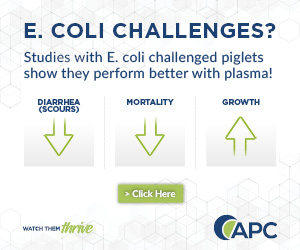