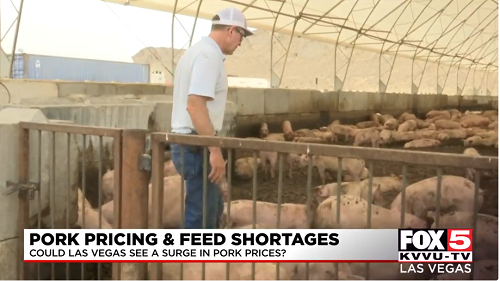 Concerns over bacon prices surging are hitting the nation, but should pork lovers in Las Vegas be concerned that they won’t be bringing home any bacon soon?

“Some of the rhetoric you’re hearing now is out of California, where there’s new regulation that’s going to start in January, where its going to require that pork that is provided to California is raised in a certain standard,” said Hank Combs, managing member of Las Vegas Livestock.

While Californians could see a pork price increase, Combs said there are other pig problems Las Vegans should be paying more attention to.

Many farms get scraps for pig feed from casinos, buffets and hotels, but as the city continues to bounce back from the pandemic, Combs said they’re not receiving scraps at pre-pandemic rates.

“I use to consider Las Vegas the holy grail of food scraps, I mean, it was just so much food waste here. It’s the town of excess, right? People they just, the portions, you go out, they are so much, you have so much left over,” he said. “When the pandemic hit, that dried up, and I was like, ‘Man, the holy grail is dried up.'”

Combs isn’t concerned amount an immediate price hike in the valley, but if the coronavirus hits another surge, pork prices could eventually go back up.

“Our pigs, we keep them at a level where they’re not starving because we want to be able to feed what we have but we can’t grow. We have all this infrastructure, but the amount of hogs, we’re at a half. My income is at half of what it could be, but I still have all of the expenses at 100%.”