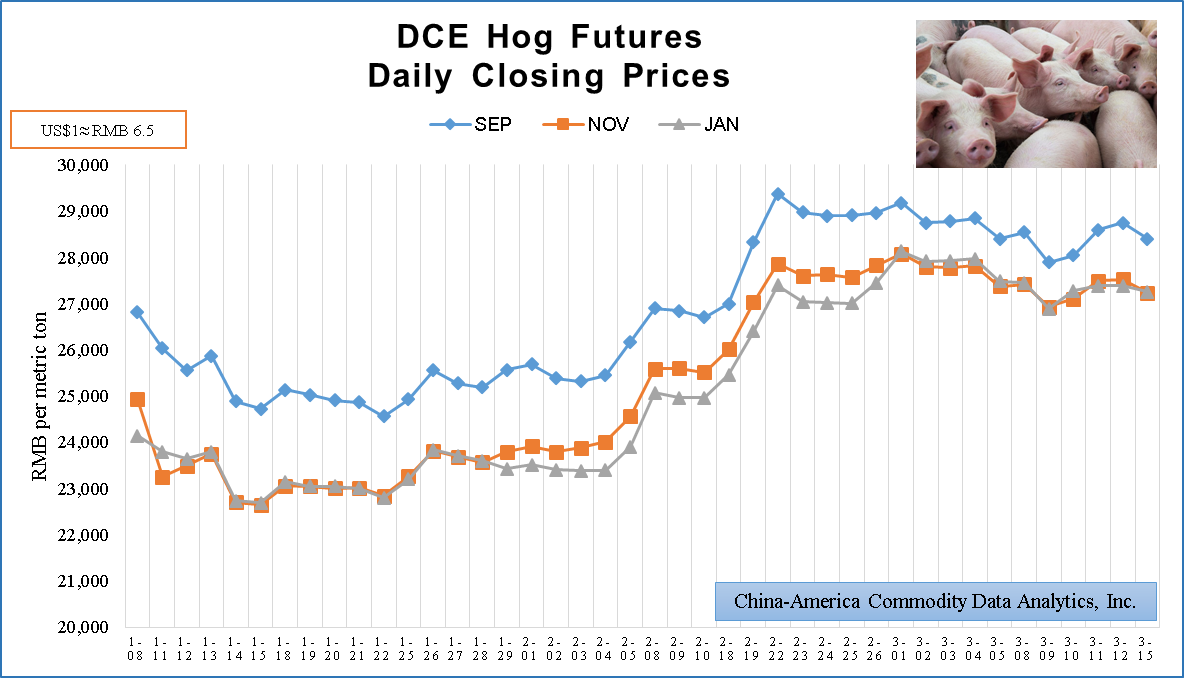 Average Daily Volume is 6,473 contracts month-to-date, down 41% from February ADV of 10,977. Open Interest on March 15 is 16,712 lots, down 17.6% from the end of February. Based on private conversation with active traders, some feel that hog futures are reasonably priced, without much upside or downside potentials. Therefore, many choose to sit on the sideline.

China’s cash hog price has been declining since the beginning of the year. Live hog price dropped below the psychologically important 30-yuan mark in Mid-February. It now trades at around 28 yuan. With March and April being traditionally low demand season, weak hog prices are not surprising.

However, weaned pig price showed an opposite trend and moved up 20% since December. The post-ASF era build-up in hog and sow stocks increases weaned pig demand and results in higher price. Comparing to the same period in 2020, weaned pig price gained 10%, while hog price dropped 19%.

There is another phenomenon beneath the surface: Big hog firms take up a disproportionally large percentage of the available weaned pigs, leaving smaller hog farmers with a supply squeeze and higher prices in the open market.

As of today, 13 publicly traded Chinese hog firms have released their Jan-Feb performance data. Together, they sold 11.76 million hogs, up 145.59% from the same period in 2020.

A side note: Chinese New Year is based on Chinese lunar calendar, which falls into different days in the month of either January or February on Gregorian calendar. For example, CNY 2021 was February 12, 2021. But CNY 2020 was on January 25, 2020.

Due to this anomaly, doing February-over-January comparison would distort real performance. It is preferable to combine January and February data and perform year-on-year comparison. 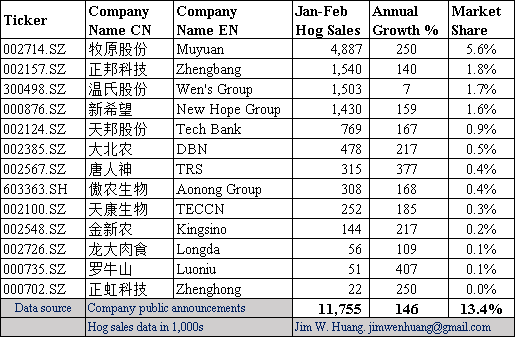 The 13 large hog firms combined have a production growth of 146% for the same period year-on-year. Together, they contribute to 13.4% of the total hog production in China.

If we treat these 13 firms as an independent hog producing region, they would rank No. 4 in the world.  They would stand behind China, European Union and the United States, but way ahead of Russia, Brazil and the rest of the World.

Seven hog firms released data on average hog sales price. Only Kinsino managed to keep sales price above 30 yuan in February. The others saw large price drop along with the rest of cash hog market.

Last week, I discussed hog price cycle as the systemic risk for the entire hog industry. Large public hog firms are no exceptions.

China’s Impact on US Pork Markets

On Wednesday, April 7, I will join forces with StoneX Group to bring out a virtual feature presentation, titled “China’s impact on US pork markets”.

In 60 minutes, I will discuss China’s Hog Industry, Impacts of ASF and COVID, DCE Live Hog Futures, Large Hog Firms in the Stock Market, and China Pork Market Outlook for 2021 and beyond.

Here is a direct link to the registration site: