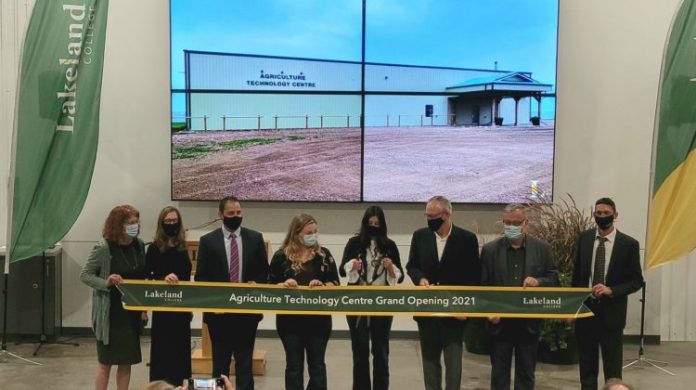 Officials are saying tertiary learning is making a shift from being concentrated in bigger centres. This as the Lakeland College fraternity cuts the ribbon to officially open the new Agriculture Technology Centre at the Vermilion Campus Tuesday, September 14.

The Centre will be the home to Canada’s first degree program in Ag Technology. In pointing out all these developments, Alberta’s Minister of Advanced Learning Demetrios Nicolaides notes this is monumental.

“This is a big deal. Not just for Lakeland College, not just for Alberta, but for our entire country. The agriculture industry remains the life blood of our society and having access to an educational resource like this, helps ensure that Alberta’s agriculture sector remains world class.”

With support from several partners including New Holland, Canada Foundation for Innovation, Lewis Farms, MNP and the RBC Foundation, the Centre covers 743-square-metres featuring a tech hub with displays and analytical tools, as well classrooms, a technology lab and a data lab.

Dean of Agriculture Josie Van Lent says they have a full cohort of students signed up for the first Bachelor of Agriculture Technology program which leaned on an industry needs assessment strategy in its development.

“Industry said, we need more training in technology, soft skills training as well as leadership skill training. We have also built in some advanced livestock agronomic production into the degree. So we are really responding to industry and because of that, I think our students will definitely have a leg up in their education and the employment opportunities.”

Van Lent pointed out that several of the students are coming out of the diploma program at the College. Manitoban Bobbi-Jo Foster, who hails from a pure-bred Hereford background readily saw the benefit in pursuing further studies in the new ag tech degree program.

“One of the main things I’m really excited for is to learn more of the GPSing side in the crop sector as well. Because growing up, I have never really been a part of that, but it’s definitely something I can see in my future years as I want to be more of a mixed farmer, so I can make my own corn silage and have that kind of stuff on hand, so I don’t have to buy out from the farm, because it’s a super big cost.”

Foster is also keen to delve into the livestock technology as she furthers her studies and bring those skills to her herd in the future.

The Bachelor of Ag Technology program runs over two years and faculty say it’s structured to bridge the gap between emerging technologies, ag management and production systems. The opening of the new centre is part of Lakeland’s Student-Managed Lab Revitalization capital project.