Last week the U.S. hog market harvest reached 2,587,000, about 130,000 more than a week ago and a year ago. Packers are obviously getting more hogs killed as they navigate coronavirus issues including having enough employees at work. Packers have great motivation as the DTN Gross Packer Margins calculation is $53 per head, a year ago it was around $20 per head. We expect U.S. Packers to continue to ramp up production, motivated by excellent gross packer margins.

U.S. hog market weights continue to decline. The first four days last week had everyday weights about 1.5 lbs. lower than the same day the week before. Weights last week on the National Base were also over 1 lb. lighter than a year ago.

Some claim 4-7 million hogs backed up due to plant closings and shutdowns but we have a hard time, right or wrong, getting to that number with weights having dropped 10 lbs. liveweight since the first part of May. Also, we hear from the field a number of our Genetic customers are not backed up. Many are selling ahead in case of plant closures. The last week we heard of plants in the Eastern Corn Belt calling looking for hogs. The customers we do have backed up are in the Quad state corner of Nebraska-South Dakota-Minnesota-Iowa. There it is real. The multi-plant closures in that area have caused real problems.

We also know there has been ongoing euthanization of market hogs and smaller pigs. How many is anyone’s guess but it has and is happening.

We also know there has been ongoing euthanization of market hogs and smaller pigs. How many is anyone’s guess but it has and is happening.

Usually, this time of year is near maximum finishing capacity as all pigs to be harvested from now to January are in inventory. Question if the market thinks there 4-7 million hogs backed up what will market do if inventory is less than this? Should there not be upside? If you’re a pork buyer whether domestic or foreign, you all have the same news. All these hogs backed up, why would you want to be an aggressive pork buyer when this expected supply is coming? Bottom line we don’t believe 4-7 million hogs backed up. June 1 U.S. Hogs and Pigs Report will tell us the story.

Sow Harvest continues to be aggressive the latest weekly was 69,000+, last year’s average 57,500. It appears to us last quarters sow harvest was about 100,000 more than the same quarter a year ago. We also believe many poor skinny sows of little value (Hello world’s largest genetic company) that would normally go to slaughter are now being put down and not in sow slaughter count.

We expect  U.S. breeding herd is down at least 150,000 in the quarter and would not be surprised if it’s down 200,000 or more. Whatever the number, the U.S. production capacity continues to contract.

The June 1st Hogs and Pigs Report, in our opinion, has the makings to be a major market mover to the positive. For us producers let’s hope so. 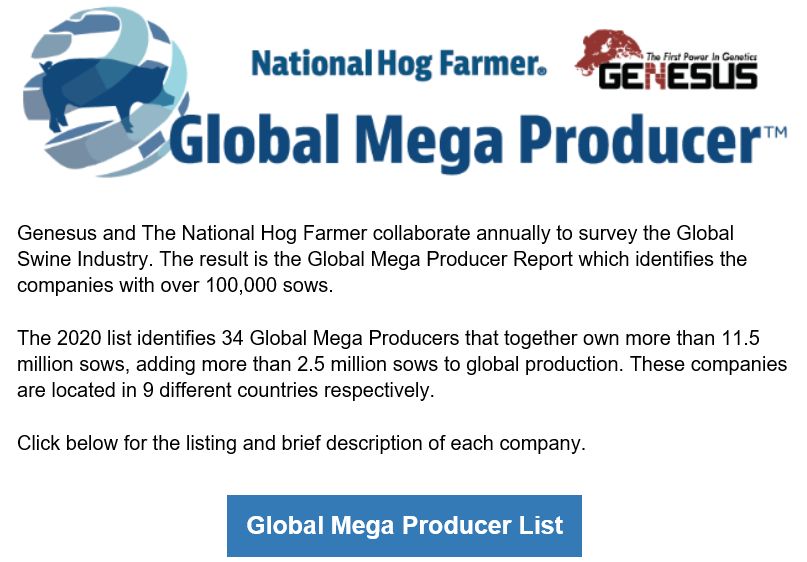