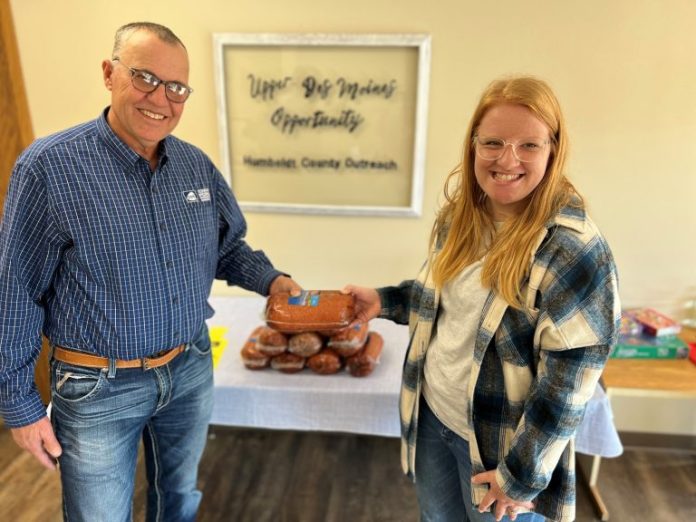 For five years, Iowa pig farmers and those in the pork industry have joined pork producers across the country in a “Give-A-Ham” challenge that typically starts around Thanksgiving and runs through Christmas. Over that time, the challenge has reached 6.3 million people across the U.S. with more than 36 million pounds of ham and other pork products being donated to food banks, food pantries, churches, and other food programs, according to the National Pork Producers Council, which spearheads the drive.

The food donation challenge is passed from one person to the next via social media, and it has made its way from pig farmers to the halls of Congress. In Iowa, we’ve seen Governors and all other manner of elected officials, as well as business leaders, university personnel, and neighbors down the road donating some pork in their efforts to #GiveAHamIowa and show the #PoundsofPork they are donating to the food insecure.

President of the Iowa Pork Producers Association (IPPA), Kevin Rasmussen of Goldfield, challenged others to make donations when he kicked off the Iowa portion of this national giving effort from the pork community. Rasmussen and his wife Lisa donated ten 4-lb. hams to the local food bank in Humboldt, Upper Des Moines Opportunity.

Upper Des Moines Opportunity is a network providing food pantries and other services to people in a 12-county area of north-central and northwest Iowa.

“With so many Americans still struggling with financial challenges that have developed since COVID-19 issues hit this world, this year’s ‘Give-A-Ham’ challenge is another way that we can help our communities,” said Rasmussen.

“I’m proud to be part of an industry that has already made significant contributions during the past three years to help the food insecure, just as we did with Pass the Pork and our Thank You tours to eight Iowa communities. We can all pay it forward with pork,” he said. “Giving back to our communities is a core value of pig farmers in Iowa and nationwide. It’s gratifying to come together as an industry this time of year to serve those in need.”

Anyone who would like to join the challenge that continues through December can donate not only ham, but other pork products such as ground pork, pork roast, or other pork cuts. If you are unsure what the best option is, contact your local food-providing organization for their recommendation.

If you participate, please make sure to share your photo or video on social media and tag it with #GiveAHamIowa and/or #PoundsofPork.