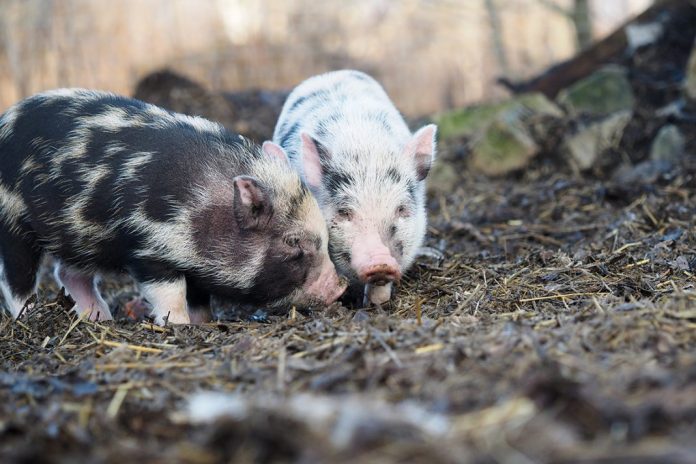 Vaccines are critical to protecting the health of livestock, such as pigs, which are a valuable source of protein for human consumption. It also protects the economic returns for the livestock industry.

How do vaccines work?

Vaccines stimulate the body’s immune response against infectious agents by imitating part of a disease-causing organism. An effective vaccine will lead to a “memory” so that when the immune system encounters the real microorganism, the animal is less likely to become ill.

Vaccines administered into muscle typically do an excellent job of protecting the internal body against infection (i.e., provide systemic immunity), but they are arguably not as good at protecting mucosal sites (such as the respiratory tract, the digestive tract, the reproductive tract, and the eyes) as vaccine administered directly to these sites. If a vaccine prevents an infectious microorganism from colonizing mucosal sites, it protects animals before they get sick but it also reduces the number of animals that shed the disease-causing microorganism into the environment, which in turn protects new members of the herd from being exposed.

Livestock vaccines need to protect against disease, but they also need to be inexpensive to manufacture, easy and safe to administer, and they should be administered at a time that is convenient for the livestock producers.

Incorporating vaccines into current husbandry practices is critical for acceptance by the industry.

Many large-scale swine operations use artificial insemination to breed pigs. Sows come into estrus and they are inseminated with commercial semen, which means the uterus can be easily targeted by a vaccine at each breeding cycle. Our lab is investigating whether vaccines can be administered into the uterus to protect against reproductive diseases and to provide passive antibody transfer to piglets when they suckle colostrum after birth.

To be successful, intrauterine vaccines must be formulated so that they do not affect semen function, litter sizes, or piglet health and growth potential. We have performed studies in sows that were already immunised with a commercial porcine parvovirus (PPV) vaccine by the intramuscular route during each pregnancy.

For this study, we combined a PPV vaccine with semen immediately prior to artificial insemination. When blood samples were tested a few weeks after insemination, significant antibody titres were detected in the vaccinated sows relative to the control sows, suggesting that the uterus may be a suitable site of booster immunisation (1).

We repeated the experiment in a larger trial with young sows, this time using a vaccine against porcine epidemic diarrheal virus (PEDV). PEDV was first detected in Canada in a swine farm in Ontario in 2014, it causes diarrhea and vomiting in pigs, and it can have a very high rate of piglet mortality (50-100%).

VIDO developed a vaccine for PEDV that was used under special permit in Manitoba in 2016-2018 and was licensed for further commercial development. Our lab is testing whether a PEDV vaccine administered to the sow uterus during breeding can protect the suckling piglets against PEDV disease.

In these experiments, the sows never received any vaccines for PEDV (meaning they would not have any previous antibodies to the virus). We combined the PEDV vaccine with semen immediately prior to artificial insemination and repeated the vaccination three times (2). Because the embryos get implanted two weeks after insemination, the vaccine components will no longer be present in the uterus at implantation and therefore the embryos/fetuses will not be directly affected by the vaccine.

Results showed that the sows farrowed healthy piglets and that the number of piglets born alive, as well as their weights at birth and growth kinetics over several weeks, were comparable to piglets born to control sows.

While these experiments should be repeated in several hundred animals to be confirmed, these results suggest intrauterine immunisation may not affect fertility or piglet growth kinetics, which are critical milestones for acceptance by the pig industry.

We are expanding the choice of adjuvants (i.e., vaccine components that augment an immune response) in the intrauterine vaccine to trigger much higher neutralizing colostral antibody titres to better protect the suckling piglets against PEDV.

Many adjuvants are spermicidal and not appropriate for use in an intrauterine vaccine administered during breeding.

The goal is to select a nanoparticle vaccine formulation that triggers the most consistent and robust immune responses in the sows (and the colostrum) without affecting sperm function or fertility when administered during artificial insemination.

Our studies have demonstrated that intrauterine immunisation is amenable to current husbandry practices, that it is fast, safe, and stimulates immunity in the sows, and that colostral antibodies can be passed on to suckling piglets.

What’s next for PEDV vaccinations?

We are currently expanding beyond PEDV vaccines to investigate whether intrauterine immunisation can protect suckling piglets against important neonatal diseases such as those caused by rotavirus, Escherichia coli, Streptococcus suis, etc. We are also investigating whether intrauterine nanoparticle vaccines can protect against critical reproductive diseases such as porcine reproductive and respiratory syndrome virus.

Vaccinations not just for pigs

While intrauterine immunisation offers a promising means to vaccinate pigs, this method of immunisation may be readily used by other livestock industries that use artificial insemination for breeding. Coupling breeding with immunisation could change vaccination practices for the animal husbandry industries.