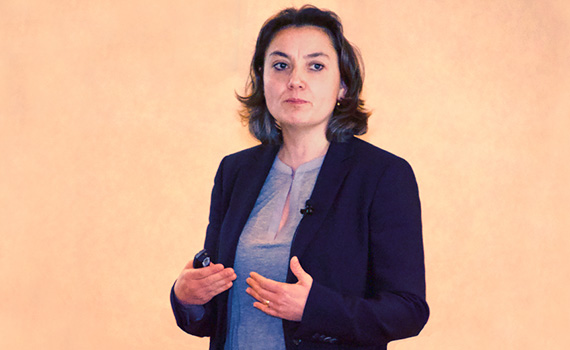 Establishing effective internal biosecurity protocols is critical to breaking the circular spread of influenza and other pathogens between sow farms and growing sites, according to Montserrat Torremorell, DVM, PhD, University of Minnesota.

The greatest internal biosecurity risk is movement, Torremorell said — of pigs, people and fomites (infection-carrying objects). “The way some farms are operated, we are creating the perfect conditions for transmission to occur,” she said.

“Routes of transmission are not independent from each other. They tend to overlap and complement each other. In the same way, if we implement biosecurity measures, we put things together so the program is more successful overall.”

Influenza is the ideal pathogen to understand and justify internal biosecurity measures because of how quickly it spreads, Torremorell explained, but internal biosecurity learnings from research focused on influenza can also be applied to other diseases, such as porcine reproductive and respiratory syndrome (PRRS) and porcine epidemic diarrhea (PED).

The most significant factors in achieving low rates of influenza transmission on farms include surveillance, a process-driven mentality and biosecurity, she added.

Influenza endemicity and persistence in farrowing houses is driven by the cyclical pattern of regular removal of piglets after weaning and new piglets being born, Torremorell explained, but fomites are the “forgotten element” of disease transmission. Research has shown swine pen railings, carts and tools used to handle piglets, doors leading to pens as well as sinks and faucets can all be culprits of disease spread (Allerson et al, 2013).

Good ventilation is important to limiting the spread of influenza as an airborne disease, the scientist acknowledged, but she questioned the exact means of transmission of airborne pathogens within the specific working environment.

“In the case of influenza, pigs can breathe in the airborne virus and get infected, but I’m not so sure this is the most important way that aerosols work in farms,” she said, noting that airborne transmission results in more even spread than what is typically found.

“The particles in the air contaminate surfaces via water droplets, dust or food particles. This has direct implications for internal biosecurity protocols.”

Farm-level changes can have effect

Best practice has behavioral and procedural elements, Torremorell explained. These include using dedicated materials and tools for different rooms or chores, following proper hygiene and decontamination protocols, limiting movement of fomites, and changing boots, gloves and coveralls between different parts of farms.

In some cases, these measures alone aren’t sufficient to prevent disease outbreaks, she said, noting that internal biosecurity measures at the room level have limited impact by weaning. However, implementing these practices alongside an elimination program at farm level may be enough to eradicate the virus, she added.

Animal movement and disease: not just about piglets

While movement of piglets during farrowing is strongly linked to pathogen transmission, Torremorell also stressed the importance of sow movement, and in particular the use of nurse sows. Though this is not equally important for all diseases, she explained, viable influenza virus has been found on the skin of the udders (Garrido et al, 2018). Nasal and oral secretions from infected piglets can transmit the virus, which the sow then spreads when she moves to a new area to adopt new piglets.

Confirming these findings, University of Minnesota studies have demonstrated that naive piglets quickly became infected when suckling from a sow that had previously been with an infected litter, while in the field, adopted piglets had higher rates of infection over the suckling period (Garrido et al, 2018, 2020). Disinfecting the udder skin of nurse sows is “an intervention that could be explored,” she said, based on data showing a significant effect.

No differences in effectiveness between pre-farrow and mass vaccination against influenza have been found, she added (Chamba et al, 2018).

Internal biosecurity is critical from birth to weaning — but growing pigs may also have an impact on disease outbreaks in sow farms, Torremorell emphasized. She highlighted research suggesting a strong association between prevalence of porcine reproductive and respiratory syndrome virus (PRRSV) on growing pig sites and subsequent infections at sow farms (Angulo and Yeske, 2018).

“It’s important to think of internal biosecurity in terms of a circle,” she added. “If we fail to establish effective protocols up to weaning, these pigs become a source of infection back to the sow farm.”

Editor’s note: The presentation referenced in this article was made to a group of swine health professionals in Asia as part of Peer Circles webinars hosted by Zoetis.