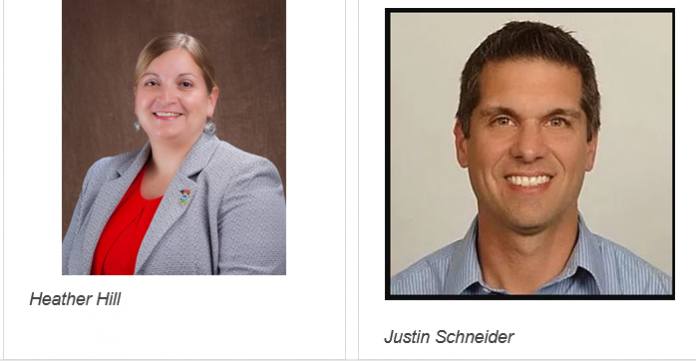 Indiana Pork recently presented three awards to individuals who have dedicated much time to advancing the pig industry.

Heather Hill was the recipient of the Producer Meritorious Service Award. She is co-owner of Hill Farms in Greenfield, Indiana, a 600-sow farrow-to-finish operation, with her husband Marc and his parents. Hill Farms also grows corn, soybeans and wheat. Heather is a former president of the Indiana Pork Board and has been actively involved since 2009. She also serves on the National FFA Career Development Sales Committee and is a leader for the local 4-H chapter. Heather is an Operation Main Street speaker.

Indiana Pork awarded its Industry Meritorious Service award to Justin Schneider. In over 15 years at Indiana Farm Bureau, Justin worked on air, water and other environmental issues for ag and was trusted on those issues by legislators. He led the effort to transition from NPDES permitting to state permitting for CAFOs. He worked on several right to farm law issues both at the Indiana Statehouse and as a resource for litigators. During his time at Indiana Farm Bureau, Justin was a policy expert that was motivated to ensure commercial agriculture thrived in Indiana. Justin grew up on a hog farm and his family still raises corn and soybeans.

Daryn Cordes of Wabash County received the Contract Grower award. Daryn has contract grown hogs for Dykhuis Farms for over 13 years. As a young man he built two brand new facilities for DFI. He has 8625 wean to finish spaces for DFI located in Roann IN. He is married and a father of two daughters. His entire family is involved in day-to-day animal care and activities around the farm. Daryn is also a volunteer fire fighter for the Roann Fire Department.

Indiana Pork also recognized retiring board member Marshall Martin of Purdue University. Nick Maple, a hog farmer from Amboy, was recognized as outgoing Indiana Pork President and Jeff Rodibaugh was honored as outgoing INPAC chairman. Maple will serve one more year on the board as Past President and Rodibaugh joined the Indiana Pork board as a member. New members to the board include Matt Paschen, farrow to finish hog farmers in Cass County, and Dale Schmitz, an area buyer for Weichman Pig Company in southern Indiana.