Let’s face it: raising profitable pigs is hard work. Optimizing your bottom line while staying competitive is a challenge on its own, but add fluctuating feed costs, new regulations and an unpredictable market to the mix and the task can feel daunting. In addition, supply chain disruptions have further exacerbated the need for producers to minimize losses, with many hoping to just break-even to keep their farms afloat.

Whether we are in challenging or prosperous times, lowering the cost of production is important because every pig producer is looking for ways to maintain their farm’s profitability and ensure their farms’ future for years to come.

Three strategies for reducing your pig cost of production

Feed costs represent the biggest input for producers, often accounting for up to 70% of production costs. It is imperative for pig producers to adapt their feed strategy to maximize feed efficiency. Here are three ways to reduce production costs without impacting your herd’s performance.

The pressure to reduce feed costs and the continuous effort to gain a better understanding of available feed ingredients are the biggest challenges the livestock industry currently faces. Around 25% of the available nutrients in feed ingredients cannot be fully utilized by the animal due to anti-nutritional factors in feed. Keeping that in mind, producers around the world are making a concerted effort to lower the cost of production and maximize feed efficiency based on nutritional and economic factors (which often vary) while maintaining animal welfare and using sustainable approaches to meet demands.

Nutritional feed enzyme technologies, such as Allzyme® SSF, have been used for different applications that range from soy sauce to the enzymatic digestion of feedstuffs. Allzyme SSF’s unique enzyme complex promotes cost-efficiency by maximizing the diet’s potential at every stage of growth. Developed through solid state fermentation (SSF), Allzyme SSF’s multi-enzymatic solution works in synergy with the complete swine diet, optimizing nutrients — including amino acids, energy, calcium and phosphorus — while enhancing the use of raw materials (Figure 1).

As a result, a complex enzyme matrix is produced. This matrix gives nutritionists a degree of flexibility in formulating diets and, in turn, the release of more nutrients for the pig, which leads to cost savings for the producer. Figure 2 shows an example of a finishing diet that utilized Alltech’s Allzyme SSF technology to improve digestibility and lower the cost per ton of feed. This example is representative of a typical diet in the eastern corn belt of the United States. 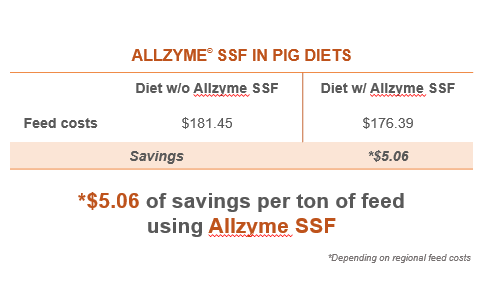 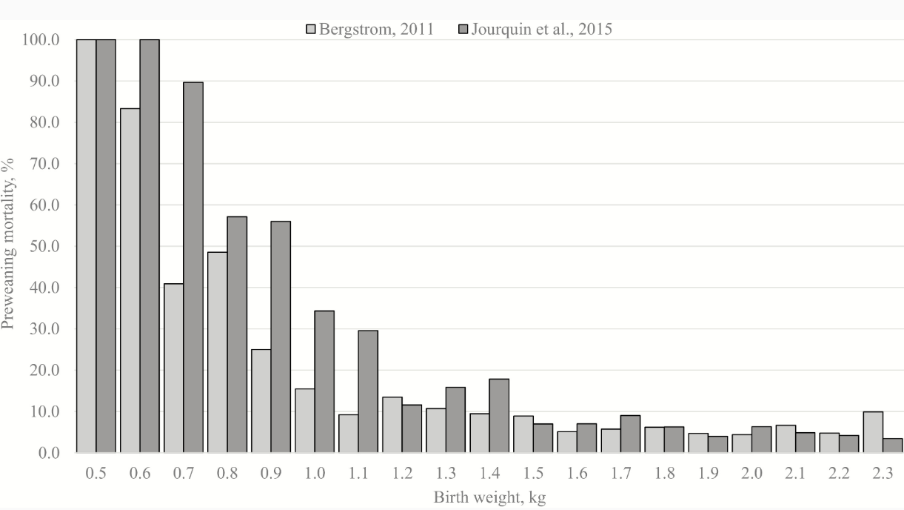 Everything you want the piglet to receive comes through the sow until weaning, so it is important to make sure that the sow’s nutrition program is fully implemented as planned and that she can transfer vital trace elements, such as those found in Bioplex® and Sel-Plex®  trace minerals, to the piglet.

There are technologies on the market today that are being utilized differently now than they have been at any time in the past to improve sow reproductive performance. Alltech’s Mineral Management program has been shown to: 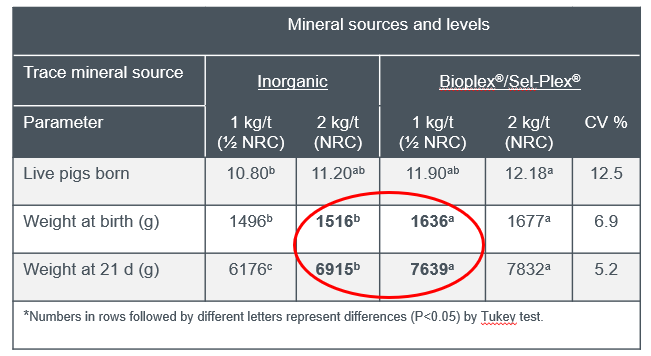 Reducing weaning variation allows pig producers to market pigs in a much tighter window and to reduce variation heading into slaughter. Reducing variation at slaughter also has the potential to reduce sort losses at the processing facility and could lead to increased revenue per pig (Cheng, Claudy, Que and Schinckel, 2019).

In addition, Bioplex minerals have demonstrated that there is less degradation of vitamins as well as enzymes. A reduction in enzyme effectiveness or vitamin activity can lead to an increase in cost or a less favorable production response. Research has shown there are several enzymes that are heavily reduced in the presence of inorganic minerals and that are less damaged when exposed to their organic counterparts in the form of Bioplex (Santos, Connolly and Murphy, 2014).

Is the water your pigs drink impacting their performance and productivity, thereby adding to your production costs? A pig’s water consumption is just as important as their feed intake because pigs that don’t drink enough water won’t consume enough feed. Pigs tend to drink around 10% of their body weight per day, or roughly two times the amount of feed they eat.

Keeping the pH in a lower range for a longer period of time reduces the conditions that allow harmful bacteria to grow and flourish. Adding acidifiers, such as Acid-Pak 4-Way®, to drinking water is an effective approach to acidification, especially when intake is low or variable, because it:

Acid-Pak 4-Way has typically been used following weaning or during stressful times in the pig’s life.

The cost of pig production

While numerous variables can affect production costs, understanding the factors that affect feed quality and implementing a quality-assurance program will help ensure that the best possible nutrition is delivered to your pigs and will help pig producers save more money in the long run. Use our pig profit calculator at Alltech.com/every-cent-matters to see how much you can save with Alltech nutritional technologies.