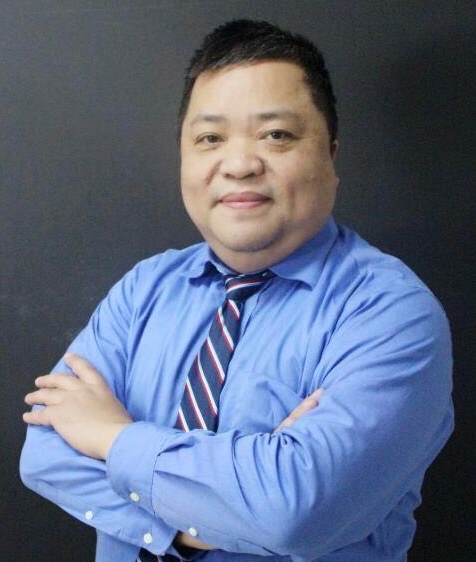 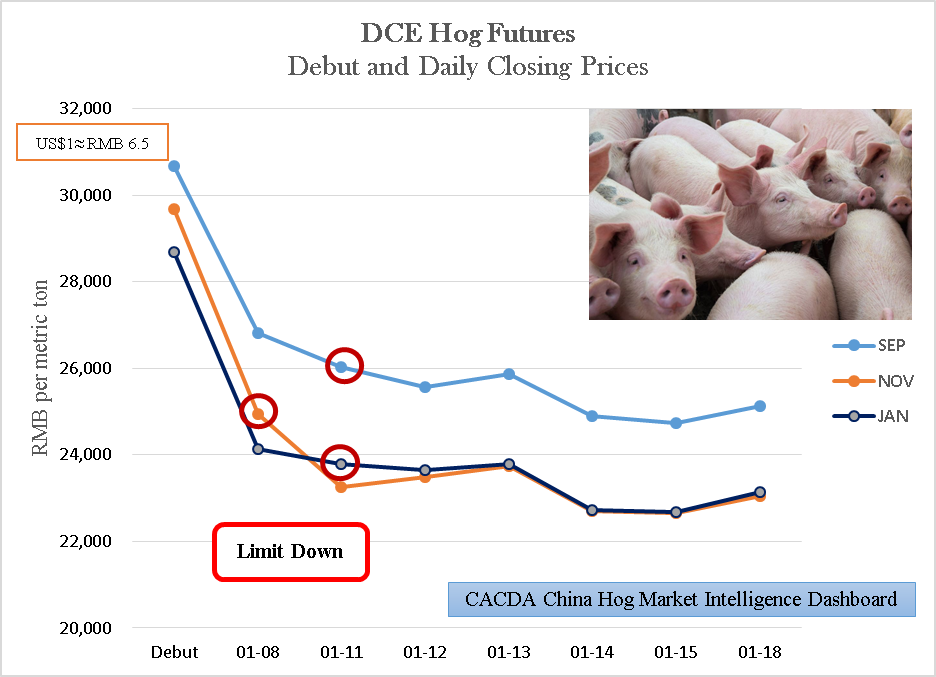 Since its debut on January 8, DCE hog futures traded 260,664 lots in seven trade days. At 16 metric tons per contract, this amounts to 4.17 million tons of live hogs, and over RMB 100 billion in notional value.

How big is the hog futures market? Here is my forecast and the logic behind it: 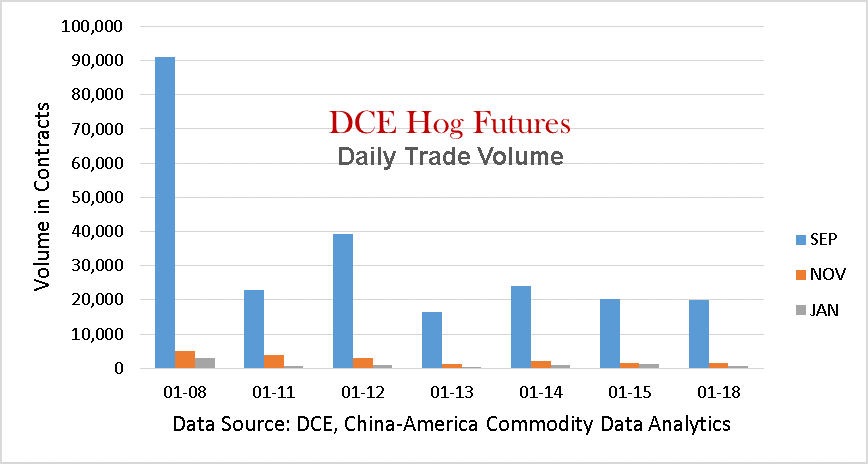 Today, China Statistics Bureau releases official figures for last year. Pork production in 2020 was 41.13 million metric tons, down 3.3% from prior year. A total of 527 million hogs have been slaughtered, down 3.2%. Fourth quarter data indicates that China has mostly recovered from the deadly African Swine Fever virus that killed as much as two thirds of its hog herds. Pork production was 13 million tons in Q4, a big jump by 55% from Q3 and up 21% from the year ago quarter.

Notional value puts the hog futures at about twice the size of China’s cash hog market. This ratio is quite low comparing to CME Lean Hog. I employ the ratio of Futures Market over Cash Market to evaluate how active a commodity contract is. This method is also used to formulate a volume forecast before a futures contract is launched in my consulting projects with Exchanges.

Let’s look at how well the Hog futures does at CME. For the seven trading days during January 8-18, Lean Hog averaged 66,407 while Pork Cutout traded 191contracts per day. At 18 metric tons per contract, futures market notional value comes to 1.2 million tons of hog carcass and pork. 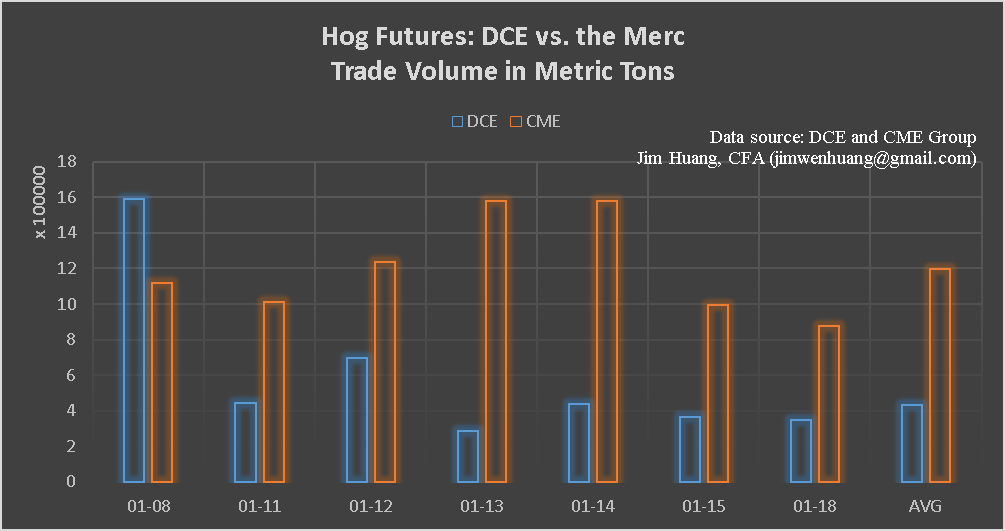 Using the same methodology, I estimate a total volume of 16.65 million contracts for the two CME contracts combined, which is equivalent to 299.7 million tons of pork. At 72.85 cents per pound, the most recent quote for April contract HEJ1, the annual notional value of CME Lean Hog and Pork Cutout is forecasted at US$480.3 billion.

In 2019, the United States produced 13.18 million metric tons of pork. Futures Market over Cash Market ratio is 22.7, which is ten times that ratio for China.

DCE Hog Futures has modest trading volume due to many restrictions now in place.

Pork is the most important animal protein in China. Government policy priority has always been to ensure ample supply of pork and stable pork price for affordability. The risk of futures market speculation to disrupt pork supply and hike up cash market price is way too high for government to tolerate. It took two decades and many product designs to bring hog futures into fruition. Therefore, DCE’s top priority is to ensure hog futures stability, not volume growth.

The table below shows the differences in Exchange rules between DCE and CME hog contracts. Data is presented in US dollars and by metric tons for better comparison. 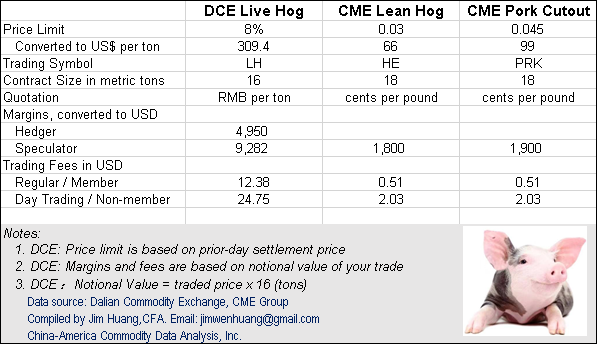 Margins for DCE hog contract are five times bigger than those of CME Lean Hog. Trading fees are $12.38 for DCE, versus $2.03 for CME non-members and just 51 cent per contract for members. High margins and fees act to price the retail traders out of the market, which is the intention of the Exchange. Trading volume mainly comes from institutional traders. Large hog producers are still at the early stage of setting up their futures departments. They either have not yet traded or just try out with small lots.

Lean Hog is a 30-year-old mature contract, while DCE Hog is just a 10-day-old baby. Give it time, DCE Hog has the potential to become the biggest commodity futures contract in China. Using CME Lean Hog as a benchmark, DCE hog could trade at 10-20 times of China’s cash hog market. This puts the notional value at RMB 26.4-52.7 trillion. The figure at the lower end surpasses the notional for DCE Soybean Meal, China’s most actively traded agricultural commodity futures.

It would not take 30 years, in my opinion. If the contract runs smoothly without a hiccup for 6-12 months, the Exchange would likely relax some of the restrictions and lower fees and margin requirements. We have seen it happening with the Egg Futures.

Additionally, China has over 30 hog firms listed in the stock market, including large producers, meat packers, food service companies and feed processors. They all have legitimate need to hedge the volatile hog price and stabilize their financials. They certainly could afford dedicated futures professionals. The learning curve would be short. Within two to three years, I expect the majority of these large firms to be active participants of the hog futures market.