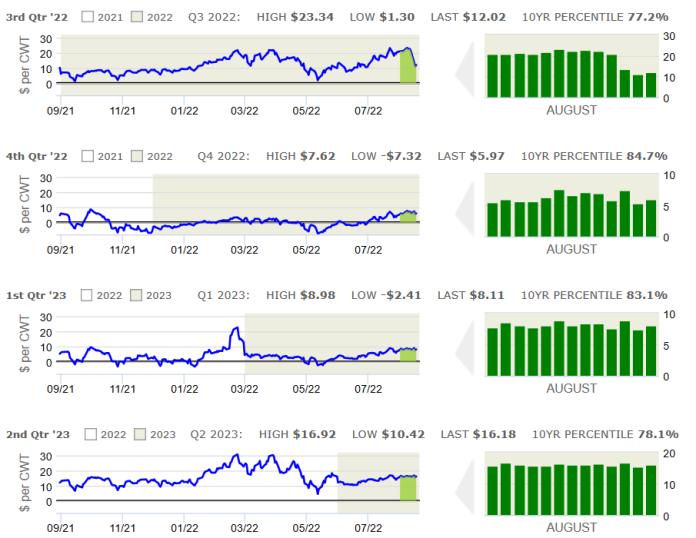 Margins strengthened further over the first half of August as despite relatively flat trade since the end of July, hog futures gained on projected forward feed costs. The cash hog market continues to hold firm contra-seasonally as demand for pigs from packers remains strong with solid domestic pork demand. Pork exports are down year-to-date despite strong demand from Mexico, while a surge in pork imports has increased domestic availability in the U.S. and helped to support cutout values as well as preserve packer margins. The base slaughter hog price last week reached the highest level so far this year at $116.42/cwt., up $11.72 or 11.2% from the same week last year and the highest price since early August 2014 when prices reached $118/cwt. Cash hog prices have risen steadily with all but five weeks posting an increase in price. Cash hog prices seasonally peak in mid-June or early July, so the ongoing strength in the cash hog market has been noteworthy. The cash hog market has been supported by pork cutout values that have increased about $15/cwt or 14% over the past six week after remaining in a $100-$111 range from late-February to mid-June. Stronger primal values for the belly, picnic and ham have helped to support pork cutout values recently. USDA is currently forecasting pork imports to reach a record in 2022 of 1.553 billion pounds, up 373 million pounds or 32% from a year ago. In the first half of the year, pork imports were up 43% from last year or 219 million pounds, and that trend continued through July and August. Domestic pork supply availability during the first half of 2022 increased 479 million pounds or 4.5% from last year, asreduced exports and higher imports more than offset the impact of lower production. Our clients have been adding new coverage recently with improved margins using flexible strategies that will allow for further margin improvement over time.