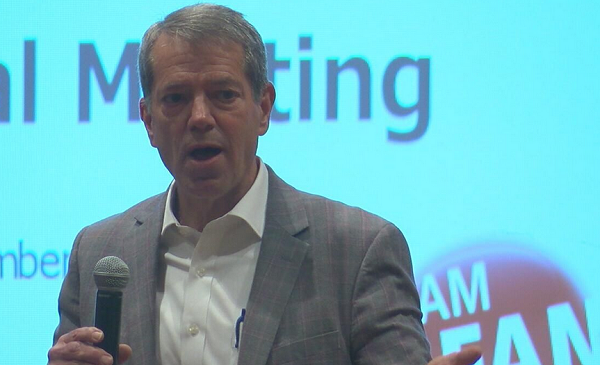 The first farmer in the governor’s office in more than a century, Jim Pillen says the key to Nebraska agriculture is summed up in one word – livestock.

Pillen shared his vision for growing the state through animal agriculture.

“Coming from the pork side of things, a veterinarian, he’s got a depth of knowledge of livestock industry,” said Steve Martin, head of A-FAN, the Alliance for the Future of Agriculture in Nebraska.

The state is a global leader in beef and Martin said while cattle production is a mature sector it continues to grow. The Beef State has also grown hog and poultry production.

Some believe the state is poised for a dairy expansion too, all efforts Pillen supports.

“We have the breadbasket, the pot of gold I call the Ogallala Aquifer, ecological zones, vast land, people that can create a lot of value and we feed the world and save the planet while we’re doing it,” he said.

Graham Christensen, a leading voice for regenerative agriculture says we’re at a fork in the road. Christensen is concerned about climate change and the health effects of atrazine as well as high nitrates from fertilizer.

He says Pillen is a “known environmental polluter,” but Christensen said he remains hopeful Pillen will provide leadership to address these challenges.

For his part, the next governor said he’s faced opposition from communities where he’s built hog barns and stresses technology.

Pillen said, “We can build production facilities, feedlots for all species and be environmentally friendly, neighborly friendly. That vocal 1% has the right to be heard but let’s not over amplify it, let’s remove the emotion from it.”

Pillen says he supports local control but says producers also need to be able to grow their businesses, the livestock operations that are the backbone of rural Nebraska.

A-FAN is funded by groups like the Corn Growers Association and Farm Bureau, and they like the governor elect’s message as he says instead of exporting corn and soybeans, feed it to cattle and hogs and export the meat.

“Let’s make stuff that is going to our kitchen table, the future is strong for that to happen,” Pillen said.

This ag friendly audience also shared appreciation for Gov. Pete Ricketts. More counties were designated under his administration than any other plus Costco built its Fremont chicken plant and the state saw other large scale livestock development during the Ricketts years.