Whey, which is a co-product from dairy processing plants that extract fat and protein from milk to make cheese, has been used in diets fed to weanling pigs as a source of lactose. Whey powder does not contain much protein because the majority of the milk protein ends up in the cheese during processing. However, cheese co-products, which contain 40 to 50% crude protein may be used in the feeding of pigs, but there is limited information about the nutritional value of cheese co-products fed to pigs. Therefore, the objective of this research was to test the hypothesis that a cheese co-product may replace traditional protein sources in diets for weanling pigs without affecting growth performance.

A total of 128 newly weaned pigs (initial BW: 6.2 ± 0.6 kg) were allotted to 4 corn-soybean meal-based diets in a randomized complete block design with 4 pigs per pen. A 2-phase feeding program was used with weeks 1 and 2 as phase 1 and weeks 3 and 4 as phase 2. Pigs were fed one of 4 diets during phase 1, whereas all pigs were fed a common diet in phase 2. Thus, a total of 5 diets were used (Table 1). In phase 1, a positive control diet based on corn and soybean meal with 3% spray dried plasma and enzyme treated soybean meal was formulated. Three additional diets were formulated by adding 6, 7, or 14 % of the cheese co-product to the basal diet to replace spray dried plasma, enzyme treated soybean meal, or both spray dried plasma and enzyme treated soybean meal. Individual pig weights were recorded at the beginning and at the conclusion of each phase of the experiment, and daily feed allotments were recorded. At the conclusion of the experiment, data were summarized to calculate average daily gain, average daily feed intake, and average gain:feed ratio within each pen and treatment group.

At the end of phase 1 (day 14), two blood sample were collected from 1 pig in each pen via vena puncture. Serum samples were analyzed for blood urea nitrogen, total protein, and albumin. Plasma samples with EDTA were analyzed for tumor necrosis factor-α (TNF-α), interleukin 6 and 10, immunoglobulin G, and peptide YY.

All pigs remained healthy during the experiment and easily consumed the provided diets. Results indicated that inclusion of cheese co-product at the expense of protein plasma and/(or) enzyme treated soybean meal in the diets did not affect average daily gain or average daily feed intake (Table 2). However, the gain to feed ratio in phase 1 tended to increase (P = 0.09) as the cheese co-product increased in the diets, which indicates that the ME values for the cheese co-product used in diet formulation may have underestimated the ME of the product. There were no impacts of phase 1 diets on any growth performance parameters in phase 2 when all pigs were fed the same diet. 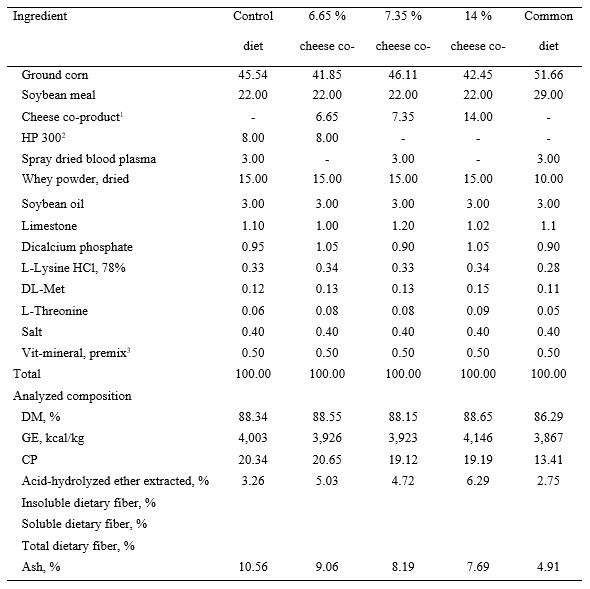 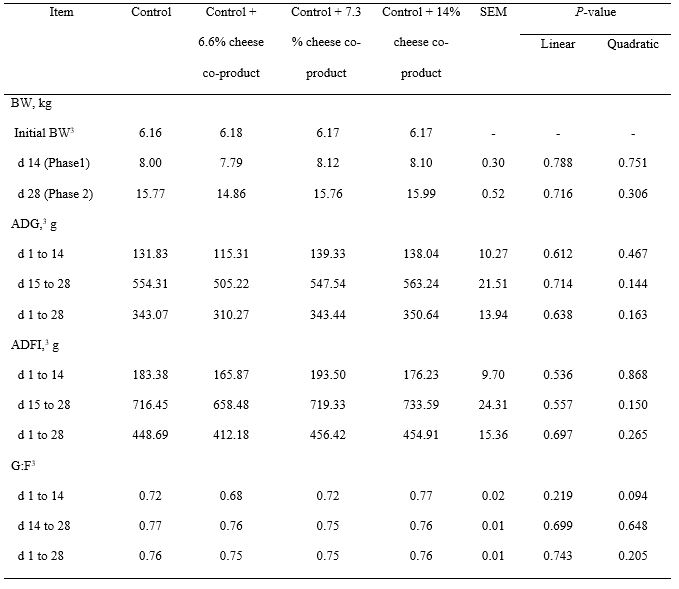 1Each least squares mean represents 8 observations for each treatment.

1Each least squares mean represents 8 observations for each treatment.