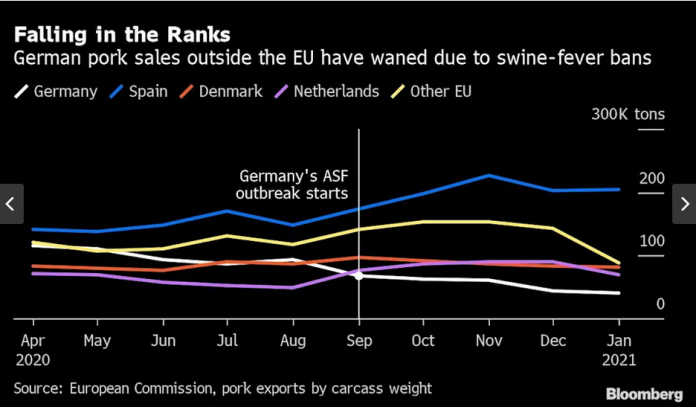 Germany’s deadly pig-disease outbreak has topped 1,000 cases, delaying its return as a major meat exporter as the battle to stamp out the virus persists.

The rising count risks keeping exports subdued from the European Union’s top pork producer, benefiting other sellers in the bloc and the Americas. Meat buyers like Vietnam and Singapore have eased initial prohibitions on German supply, but a ban in top importer China is limiting the upside. Beijing is unlikely to lift it before mid-year at minimum, according to a Rabobank report from March.

An estimated 1,016 wild boar in Germany’s east — though no pigs on farms — have contracted African swine fever since an initial report last autumn, figures from the affected states of Brandenburg and Saxony show. The outbreak appears unlikely to end soon, with infections still abundant in neighboring Poland.

“Every week we’ve got several new cases, it’s far from under control,” said Tim Koch, livestock analyst at AMI. “Some third countries are opening their border for German pig meat, but it’s all comparably low numbers. China imported more meat in the last year than all the other countries together.”

Officials from China and Germany recently held talks on the issue, and further negotiations are expected, the German agriculture ministry said in a statement. German wholesale pork prices have picked up from record lows at the onset of the outbreak as the country has been able to sell some of its excess supply within the EU and a backlog of pigs abated.

Still, farmers are also grappling with rising feed prices and added government regulations. Countries often aren’t declared free of swine fever until at least a year from their last case.

“It will be a long way to leave all the restrictions for German exports of pig-meat,” said Udo Hemmerling, deputy secretary general at farmers union DBV.