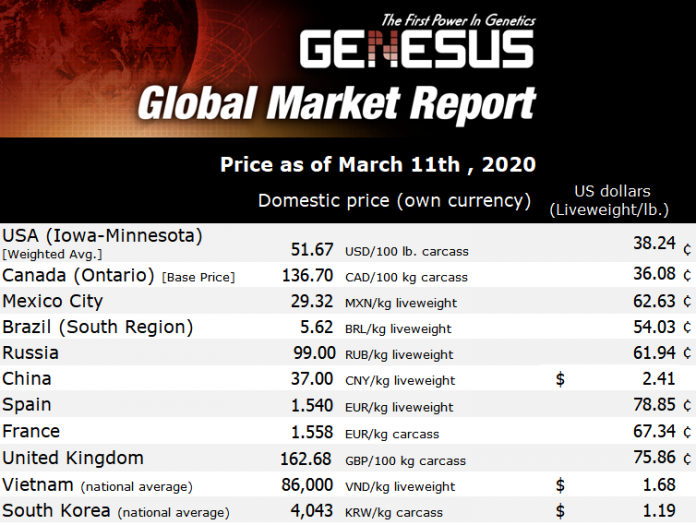 Current pig price in Russia is 99 Roubles per kg ($1.37/kg), including 10% VAT; this is up from 90 Roubles last week. Very little changing with regards to supply and demand so little there to affect the price. The increase does coincide with a significant drop in the value of the Rouble of 14% in a week. The Rouble is very linked to the price of oil.

Russia, in reality, has a very small open pig market. Russia is dominated by large fully integrated producers with live production and slaughter. Actual pigs sold liveweight to the ‘open market’ is limited as a percentage of pigs slaughtered each week.

Some major producers continue to build and stock new farms which will increase supply. Some of the increase will be offset by inefficient farms going bankrupt due to high cost of production! Medium to long term prospect is more production and reducing sales price! If Russia does become a net exporter it is reasonable to expect long term prices will align with USA, Canada and Brazil.

Russian Pig Producer’s association is advising producers to use a sales price of 75 Roubles per kg for budgets this year.

Since 2006 the Russian pig industry has seen massive development. Pork consumption has increased, this has been as a result of growing economy and people with higher incomes able to buy more meat.

Despite this increase in total consumption one frightening figure for the pig industry is the procentage of pork purchased as a procentage of total meat eaten. This is static, in comparison to Chicken which has nearly quadrupled in percentage terms! 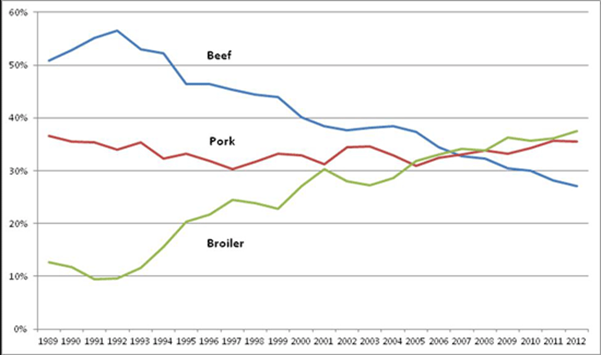 So, in a market where consumption is increasing, why can’t Pork increase its market share?

For the past 30 years as an industry we have been trying to make pork leaner and leaner and we have been focusing on FCR as a major economic trait. Doing this actually causes Pork to get paler, leaner tougher and reduces taste. It looks more like Chicken (but is more expensive).

Some time ago in the USA there was probably one of the most catastrophic advertising campaigns of all time “Pork – the other white meat”. 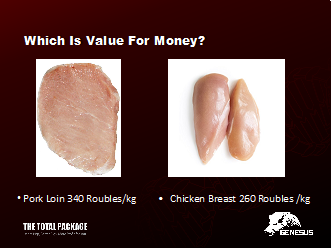 Doing all of these things – Chicken Into Pork – has in 30 years achieved nothing in terms of increased % of pork in diet. At the same time Chicken has increased nearly 4 times from 10% to 40%. It does not take a genius to work out Pork has lost that fight!

This is not a health issue. If you look at Pork Vs Chicken, the lean and fatter cuts of both are very similar in terms of procentage fat!!! Maybe this is a marketing issue, or bad marketing issue for pork?

Is there anything we can do to increase pork consumption? Well for sure doing what has been done for the past 30 years has not worked. Maybe time to at least try something else?

In Russia the most expensive cut of pork is the fattest – neck. The leanest , ham, sells at a lower price per kg than fat. Does not take a genius to work out why. Neck is fatter and testes better. Ham is dry and tasteless…

Russia has a national grading standard (GOST) that categorises pigs based upon weight and backfat at slaughter. This standard has not changed since 1976 – 44 years!

44 years ago in the UK, Porkers sold for fresh meat were 55 kg to 65 kg liveweight at slaughter. Bacon pigs were 80 kg to 90 kg liveweight!! Today in the UK average slaughter weights are in the 110 kg to 125 kg range. Slaughter contracts (GOST equivalent) have changed time and time again to reflect where the market is going.

I first started working in Russia is 2005. Back then average slaughter weight was only 105 kg!

If you change nothing, then nothing will change!

There is a very simple definition of stupidity, “keep on doing the same thing when you know it’s wrong”.

We know the global population is increasing and will need more food! We know economies in general grow, meaning consumers have more spending power to spend on food! We know producing leaner and paler pork has not increased the % of pork in diets! We know of many industries that failed to change and have gone – VHS music cassettes, analogue phones, fax machines, there are many examples. Retail shops are disappearing as on-line shopping increases.

To increase % of pork sales we know we have to do something…we would all be stupid not to!

“Genesus genetic program works very well for us. Sows produce large uniform litters with good birth and wean lots. Having a good appetite in lactation helps breed back. In our system having an animal with a high immunity sure helps.

Genesus boars produce fast-growing pigs to market with low mortality. The boars are easy to work with and are willing workers. Carcass is excellent along with meat quality.”

“We at Springwater Hogs, like the Genesus animals. Sows eat well, milk well, breed back good. The sows wean heavy pigs of uniform size, with low mortality. Boars perform well, are really good to work with. Weight are good and mortality from wean to 290lbs is 1.98%, which we think is very good. Pigs grow well, convert well and finish off well. The service is really good. We are happy with Genesus.”