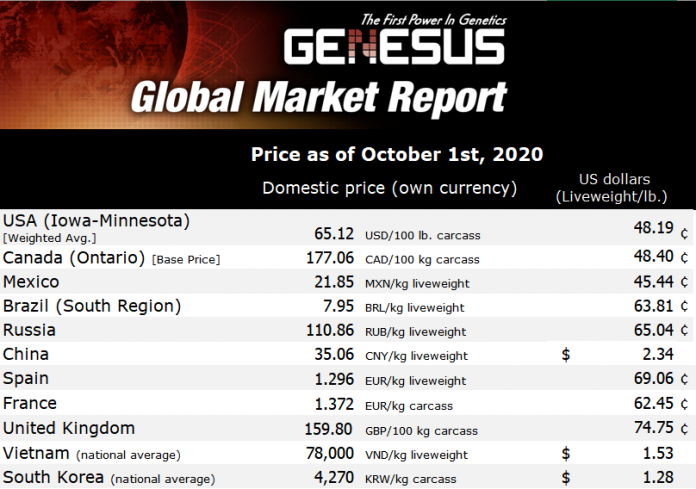 Due to the pandemic and the reduction in consumption, the prices of pork in Mexico remain down.

In order to understand better how pork prices have evolved in Mexico during the pandemic times, we use this 3Tres3 comparative chart.

Mexico’s pork prices have been riding a roller coaster in 2020. Prices began to fall in February, reaching their deepest point in mid-May (33.39 USD/cwt). From here a relative recovery started, gaining a little more than 20₵/lb in about two months (July 24 – 53.50 USD/cwt) but still far from the 70+ ₵/lb in January. Continuing with a rapid decline in prices -again- through the last two months, getting 45.44 USD/cwt on Sep 25th.

The graph not only compares prices in the United States but also the behavior of the exchange rate between the Mexican peso and the US dollar during the period analyzed. The drama of the devaluation of the dollar, to finish worsening the situation, has not been the best either unfortunately for the Mexican producer. 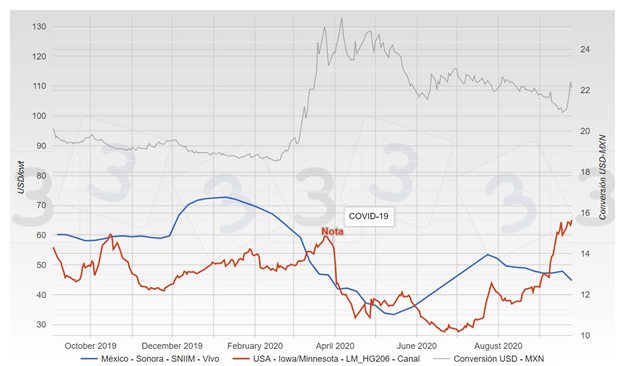 However, not everything has been negative in the industry. The good news for Mexican pork producers is the increase in their exports, which has been very positive for bringing fresh and revalued dollars to the country. Mexico exports meat for more than 2,300 million dollars. The shipments with the highest increase were those related to pork, which during the revised period summed up to 171,763 tons, 55.7% more than in 2019 with a 39.9% higher value. They totaled revenues of $ 606.2 million.

Until August Mexico increased its beef exports to the United States by 23%, positioning itself as the third main supplier of that country, with a total of 208,877 tons. The numbers – according to data from the United States Department of Agriculture (USDA) – indicated that New Zealand was below Mexico, which marketed 147,857 tons of beef, enjoying an increase of 7%.

While during the first eight months of the year, Mexican purchases of pork to the US (697,407 tons) experienced a reduction of 6.7% compared to the same period in 2019.

Impact of the Pandemic Crisis on the Mexican Agricultural Sector

Covid-19’s impact on the economy has been devastating, and the scope and duration are still uncertain.

One of the worrisome points, even though the agri-food sector is one of the strategic sectors and most resistant to economic turbulence, is the unemployment rate. In the agricultural sector it certainly contributes with few formal jobs, only 2% of the total; however, the unemployment trend in general is a bad sign, because it indicates that more people lost their source of income and therefore demanded fewer goods.

The above described is a bad sign for the agri-food sector that will have lower domestic demand during the remainder of the year and all of 2021. The first problem will come from the lack of income from a big part of consumers, and there will be another effect, on consumers who did not lose their purchasing power during the quarantine, but who will now have other consumption habits, such as not eating out again, for example, at least not while the health crisis lasts.

COVID 19 came to radically transform the way in which consumers demand their food. On the one hand, we see a re-composition of demand due to the fall in household income and, on the other hand, we see the change of habit towards healthier foods that improve the immune system. The new task of producers will be to understand the consumer and highlight the attributes of their products, as well as balance their food portfolio, distribution channels, and new interrelation with food delivery services at home.

The three main proteins of animal origin, pork, beef and chicken, fell in their import volumes during the first 8 months of the year