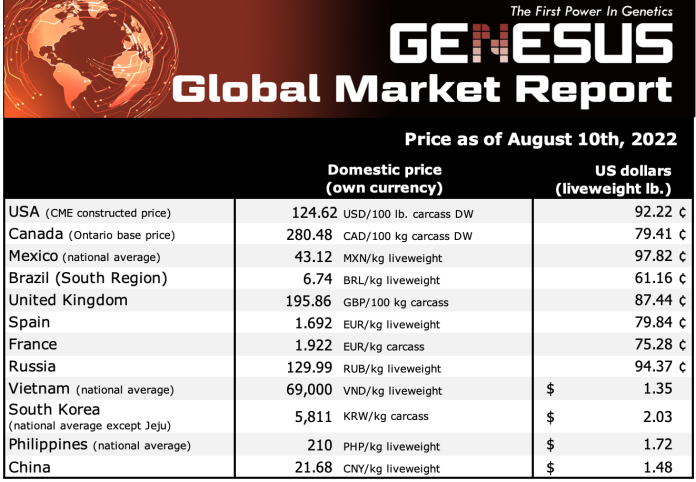 Despite an increase in liveweight prices, Mexican pork producers are still feeling the strong impact of the rise in raw materials (grains, fertilizers, etc.) in previous months, which has resulted in a cut in their profit margins.

During the first six months of this year, Mexico shipped 302,929 tons of beef, pork and chicken abroad, this represented an increase of 1.8% above what was registered in the same period of 2021.

However, while -between January and June- beef and chicken exports showed an upward trend in both value and volume, pork exports fell.

Pork exports totaled 120,227 tons, mainly due to a contraction of 15.7%, being the only meat that experienced a downward performance despite the fact that the price per ton did rise by 7.4%, up to $4,024 US dollars.

During the first five months of the year, exports to China continued to decline, being 74.3% lower than in 2021, which made it third place among the main destinations for Mexican pork with 11,357 t.

The United States becomes the second most important market, buying 22,066 tons, achieving a year-on-year growth of 50.8%; representing 21.9% of total shipments.

Another region that during the reviewed months increased its demand for domestic pork was Canada, which with 2,022 t. acquired a 28.7% higher volume.

US pork imports continue to rise. During the first four months of 2022, Mexico remained the main destination, consuming 317,085 tons, an increase of 25% over the same period of the previous year.

According to the U.S. Meat Exporters Federation (USMEF), these purchases generated 11% higher spending for Mexico year-on-year, with which billing rose to 543.9 million dollars.

Despite this increase in shipments to Mexico, the general trading of pork carried out by the United States experienced a drop of 20% in terms of volume and 18% in value, remaining at 842,804 t. for 2.3 billion dollars.

At Genesus we believe that we are producing Genetics of pork that the consumer craves. It’s a better eating experience. Genesus – Jersey Red Duroc is the name of our World Leading Duroc. Attached is an interview of Spencer Long of Genesus and Jim Eadie of Swineweb discussing the Jersey Red Duroc.

Link to the video: