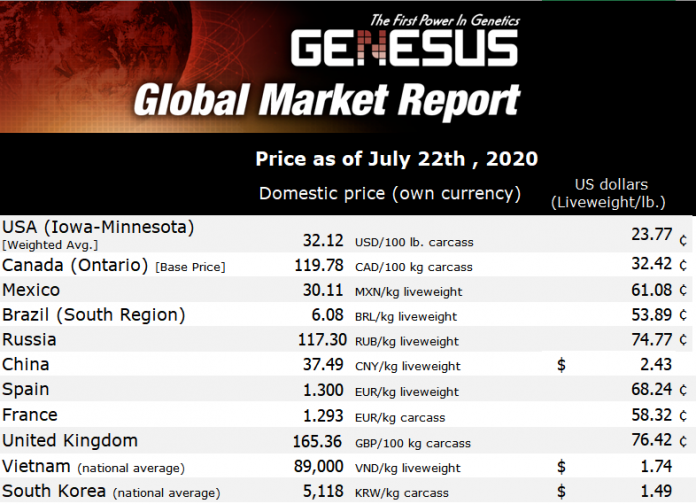 China’s live slaughter pig and wholesale pork prices are once again on the rise after a steady decline following a drop off after Spring Festival. The downward trend in prices occurred during a time when domestic production is still recovering and a slow rebound of consumption after the Covid-19 epidemic. The high price of pork and drop in consumption from the heavily affected catering business pushed the pig price down to a low point in May. Since the catering industry has resumed operations and factories ramp up production following COVID-19 restrictions. Thus, pork consumption has begun to rebound and has increased significantly.

Live pig prices have now risen for 8 consecutive weeks closing at CNY/kg 37.49 ($2.43/lb) on July 20th. This upward trend is expected to continue for the next few weeks and may even challenge the all-time high of CNY/kg 38.71 before leveling out again.

Because of the long hog production cycle, the recovery of China’s production capacity has yet to be reflected in the market place. Also due to the seasonal piglet scours in wintertime and the low survival rate, the number of market hogs has been decreasing from June to August of this year.

So far the COVID-19 epidemic has been kept well under control and life in China is returning to normal, which stimulates the consumption of pork.

Due to the lasting impact brought about by ASF, there is a substantial gap in the domestic pork supply in China. To prevent soaring prices, a large amount of imported pork entered into the Chinese market. The import volume of pork reached 3.5 million tons in 2019, which was 1.4 million tons more than the previous year.

Among exporting countries around the world, Brazil and Europe are the biggest beneficiaries of the explosive increase in the demand for pork in China. In 2019 the amount of pork purchased from EU increased by 76%. According to the recent data released by GACC, China has imported 2.123 million tons of pork from January to June 2020 with a year-on-year increase of 140%.

Affected by ASF and more stringent environmental protection policies in the industry, a large number of small and medium farms were forced out if the business. In 2019 the Chinese hog inventory decreased to 310 million heads, and the number of marketed pigs had a sharp drop to 540 million heads which amount to a year-on-year decrease of 21.57%.

With the rapid decline in production capacity, pork prices continue to rise. To stabilize the local market, in March 2020, the Ministry of Agriculture and other governmental agencies released a set of policies to support the hog farming industry. Since, many companies have announced aggressive new plans to increase production. According to the National Bureau of Statistics, the national pig inventory is 339.96 million head at the end of Q2, increasing by 5.8% over Q1. Among them, the sow inventory is now reported to be 36.29 million, which is an increase of 5.4% on a year-on-year basis, or up 7.3% over Q1.

The profitability of hog farming is still attractive and in the short term, there is no sign of an easing up. Large amounts of capital have flown into the swine industry and since the second quarter, the number of newly registered swine companies has increased by 175% year on year.

The shock of ASF and its impact upon the Chinese hog farming industry is still being felt. Producers are still concerned about ASF, but only 10 new confirmed cases of ASF have been reported within the first half of 2020. However, the combination of ASF with the shock of COVID-19 creates a lot of uncertainties in the recovery of China’s production capacity and pork supply.

There is no doubt that the import of superior swine genetics from International companies will play a critical role in speeding up the recovery of China’s hog industry. Since the beginning of 2020 imports have resumed, and large numbers of breeding pigs have been flown into China to help resupply its breeding farms.

It’s been reported that more than 100 planeloads of international genetics are needed to fill this void left by ASF. 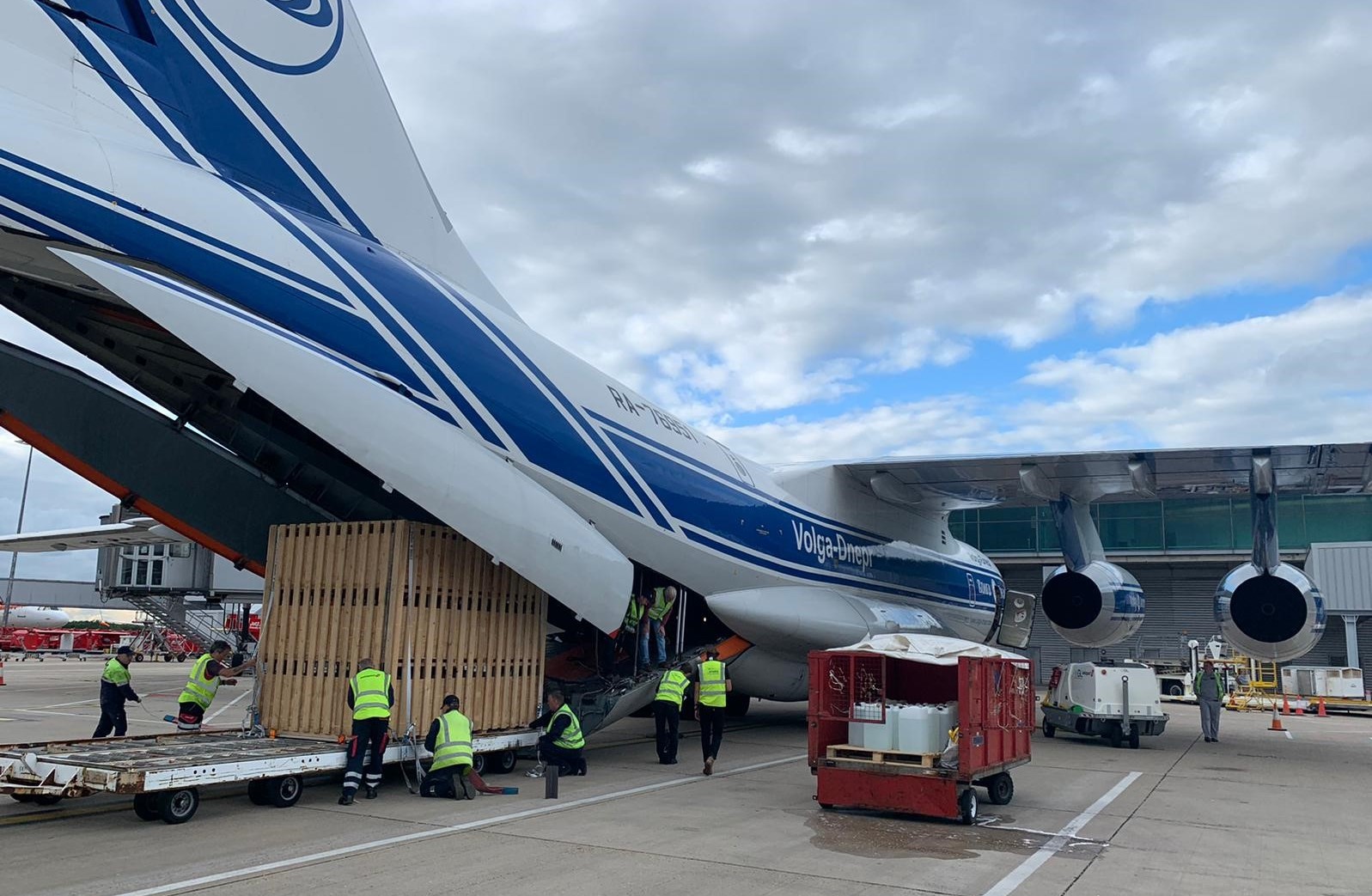 In late June, three planeloads of Genesus breeding pigs including Duroc, Landrace and Yorkshire from Genesus UK nucleus herds arrived in Xuzhou airport in Jiangsu. All the imported pigs have been transferred to the quarantine facility of Scandinavian Farms Pig Industries Limited (a Danish-owned mega farm) for quarantine and inspection. SFPI will raise Genesus Brand breeding pigs and sell them on China’s domestic market. The second shipment of Genesus breeding pigs is being scheduled and more breeding pigs are to be shipped into the Chinese market helping with the recovery of domestic production.

We are pleased to announce, Tom Stinson has accepted the role  as U.S. Director of Sales for Genesus. 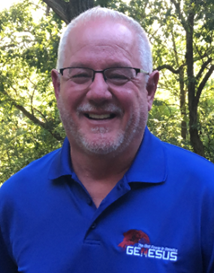 Tom has been with Genesus for two years in the role of Cooperate Sales Lead. Tom grew up on a Purebred Yorkshire and Duroc farm.

After attending Kansas State University in Horticulture Science, he was recruited to Murphy Family Farms in N.C.  Tom served in a number of roles including Nevada Missouri Start-Up Production, Construction and Grower Development Lead, then started up the High Plains Operation in Laverne Oklahoma.

Tom has owned contract nursery farms in Oklahoma as well as other businesses. Tom has a deep understanding of business and production practices. 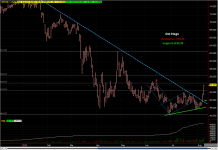