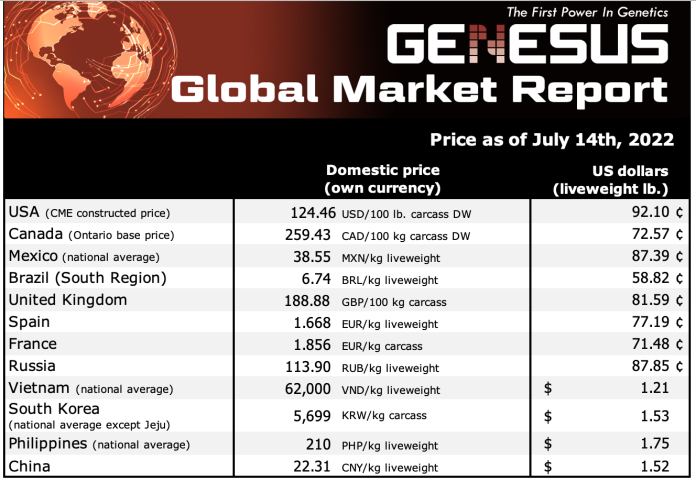 China Pig and Pork Prices on the rise!

Recent headlines in China have been” A sharp rise of 1 yuan/kg a day!”, “Pig Prices rose 15.2% a week!”, and “How high can pig prices soar in the second half of the year?” We have been predicting this kind of market response for several months now as a result of liquidations starting last July, and now being felt in the marketplace.

We are not surprised by these price trends after the staggering losses in the industry of billions of dollars going back into 2021 when inventories had reached their peak, prices plummeted and liquidation commenced. With losses ranging from 300-600 RMB ($50-$100) per head, more trucks than usual were observed transporting sows and light pigs to Slaughter in October/ November and again in February/ March of 2022. What we are seeing now reminds me of the US in 1998 when many large companies couldn’t make it and were taken over by others.

Who knows how many sows were actually liquidated during the last 10-11 months in China. We have seen reports of an 8.2% reduction in sow’s inventory going back to June of last year. Our own unofficial reports from our contacts suggest actual liquidation may be closer to 15 % or more which would be equivalent to the entire US Sow Inventory.

Looking at yearly price trends, it is interesting to note similarities between 2019 and 2020 after the liquidation of sow herds due to ASF disease outbreaks then, and poor markets now. Note that the bottoms in 2019 and 2022 occurred at essentially the same time in the years and at the same level. However, July 2022 price is significantly higher and sharper upwards trend trajectory. Does this mean the 2022 price trend will meet or surpass the 36 RMB/kb ($2.45/lb.) high of 2019?

Market Outlook: Pig prices will remain strong for the coming months as a result of the accelerated liquidations that occurred in October and November. Look for another price surge to even higher levels in the fourth quarter of 2022 as a result of the second round of intensified liquidations that occurred in February and March earlier in this year.