Dr. Christensen says prevention is all about biosecurity.

She says we know one case of ASF in Canada or the U.S. will quickly spread across the border into the other country.
For Farmscape.Ca, I’m Bruce Cochrane. 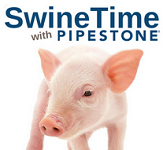