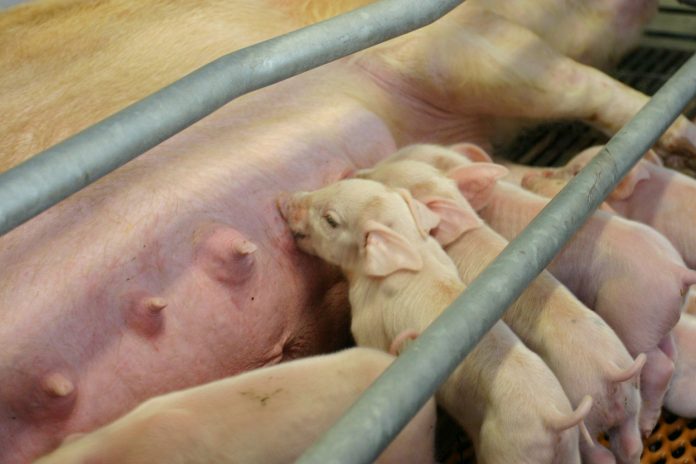 Porcine Reproductive and Respiratory Syndrome (PRRS) continues to be a concern, in particular in areas where the 1-4-4 variant has taken hold. This new variant appears to be more aggressive than previous ones. The main mode of transmission appears to be from pig to pig, but people, vehicles and even air are also known transmitters of the virus so there’s no one method to pinpoint.

The Swine Health Information Center, in collaboration with the American Swine Veterinarians, recently presented a webinar discussing the experiences in southern Minnesota and northern Iowa with the 1-4-4 variant. Dr. Paul Yeske, a swine practitioner at Swine Vet Center, says that the 1-4-4 variant isn’t anything we haven’t seen before with PRRS and that many herds have shown similar progression of the disease. Sow mortality, going off feed, post-weaning mortality, increased mummies, and abortions are among the clinical signs. However, Dr. Yeske has observed that PRRS 1-4-4 is significantly more dramatic and moves through the herd very quickly once clinical signs are seen.

For example, four or five pigs may be off feed one day and by the next day, 250 sows or more are off feed. Abortions start about the same time as sows go off feed and increase very rapidly. Piglet mortality can be as high as 50-80% in severe breaks. In terms of average daily gain, pigs that were gaining 2-4 lbs per day dropped to one pound per day. Previous vaccination and virus exposure do not seem to provide immunity to 1-4-4 according to Dr. Yeske, but there are studies underway to determine vaccine effectiveness. The variant seems to spread easily in a geographic area, especially in overcast and foggy conditions.

With production impacts like those listed above, there’s no doubt that PRRS can have a significant financial impact on a farm. Estimating the cost of PRRS is challenging and can vary widely between farms, depending on whether they have endemic PRRS or are epidemiologically infected. A recent study in Germany set out to assess the economic costs of endemic PRRS using a cost simulation calculatori. Data from 21 sow herds on health and production performance, farm management and environment were used. The herds were positive for endemic PRRS. Annual revenue, costs and farm budget were calculated for each farm’s actual PRRS positive status and simulated as if each farm has tested negative PRRS.

All of the 21 farms in the study experienced a significant loss due to PRRS. Renken, Nathues et al, calculated the median loss attributable to PRRS compared to the expected income if these farms had been PRRS negative. The financial impact attributable to PRRS was significant with profit per sow dropping from $367 to a loss of $46. That’s over $400 per sow! At a farm level, the average impact of PRRS was a 19% reduction in profits with a worst case being a reduction in profit of 41%.

Dr. Yeske recommends that producers review their biosecurity plans for areas of greatest risk. He describes risk as activities that may introduce a disease like PRRS, and how many times per week (frequency) that activity occurs. The rapid spread, varied methods of transmission and impacts of PRRS create a sense of urgency to proactively and critically evaluate your biosecurity practices and procedures. Are there any weak points in your system that you can improve on? If so, act sooner rather than later. It’s better to find out about them now than when you’re conducting a PRRS outbreak investigation. Review the Biosecurity Resources cited for a list of tools available to help you conduct your own biosecurity self-assessment.

Effective biosecurity is your best line of defense against diseases like PRRS. Proven biosecurity software systems like Farm Health Guardian can help you and your employees protect the health of your livestock, saving you time and money. Farm Health Guardian is a new solution to digitally record, monitor and generate reports on all types of contacts and conduct disease outbreak trace-backs in a matter of minutes.

Farm Health Guardian – Your Partner in Animal Health and Biosecurity

Farm Health Guardian is a biosecurity and animal health software system that helps producers to lower their cost of production through improved animal health and reduced disease risks. Farm Health Monitor and Farm Health Protect are two features of the platform.