Mycotoxins are chemicals (secondary metabolites) produced by moulds or fungi infecting grains. There are over 400 known mycotoxins; however only a small number of these probably affect pig performance on a regular basis. It is important to note that the presence of the mould or fungi does not guarantee the presence of mycotoxins; conversely, mycotoxins can be present in a sample with no obvious mould contamination. The mycotoxins of major concern in Canada are listed in Table 1. Several factors contribute to the production of mycotoxins in grain, including humidity and temperature during the growing and harvest periods, oxygen availability during growth, harvest, transport or storage and insect or bird damage. Multiple mycotoxins may be present at the same time and mycotoxins may be “masked”. These are mycotoxins bound to another molecule which may make them undetectable by routine assays. They will however, break down in the gut, and cause problems. 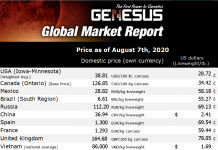 Here are some of the most significant market trends identified by Glowlit in the last week: 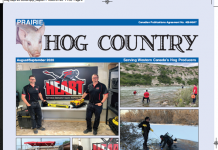