For the past 18 months Scott Dee, DVM, director of research at Pipestone Veterinary Services, has been investigating whether feed mitigants can protect against the transmission of certain swine viruses.

“The good news is, for the most part, mitigation is always better than nothing,” he told Pig Health Today. Even better news: “The majority of the products we’ve tested have had a positive effect.”

The researchers looked at a range of inclusion rates and tracked the treatment costs. “For producers there are options based on budget, on your risk tolerance, on your milling capacity,” Dee noted. “There are different chemistries, different formulas, different applications; you can just go down the list and pick the one you want.”

The pigs tell the story

To test the feed mitigants’ effectiveness, Dee and South Dakota State University researchers created 1-pound blocks of ice blended with PRRSV, PEDV and SVA. The blocks were dropped into feed bins and left to melt, allowing the animals to encounter the viruses more naturally.

“We documented that the pigs actually contracted the viruses, and then looked at the infection level in the pig, the clinical signs as well as growth performance,” Dee said. “The really interesting thing to me was even though we found evidence of the viruses in the pigs, say PEDV in the fecal material or PRRSV in the blood, pigs on mitigated feed seem to be able to fight that challenge.”

A few questions remain regarding the mechanism of action, Dee noted. For example, is the mitigant stimulating the pigs’ immune system? Is it modifying the gut? Or, is it reducing the viral load? All good fodder for possible future research projects.

Taking mitigants on the road

Another research project that Dee recently completed was designed to apply a real-world setting to the feed/virus survivability question. Again, he spiked feed with PRRSV, PEDV and SVA carried in trucks that traveled 6,000 miles, through 18 states over 21 days. The trucks had vents that allow environmental exposure, specifically temperature and humidity changes along the way.

He pointed out that the samples, 30 grams each, were contained securely in boxes so as to prevent the risk of spills. The process was approved through USDA and the Board of Animal Health director.

“We’re trying to see whether what we’ve modeled in the lab is representative of what happens in the real world,” Dee said. “It’s a survival study, so we’ll take the feed ingredients and see if the virus is still alive.”

The test showed that SVA survives and was stable in every feed ingredient evaluated, and that PRRSV and PEDV survived in organic and inorganic soybean meal.

The plan is to replicate the study in November, but the researchers will use 1-ton totes to more closely represent volumes that pork producers deal with.

There’s a lot going on in the world right now, but Dee emphasized that it’s critical for producers to remain vigilant to minimize exposure to a range of viruses as well as committing to African swine fever (ASF) prevention.

“Don’t get lax. Maybe you don’t hear about the ASF challenge as much, but it’s still a concern,” he said. “We have to be very vigilant on biosecurity every single day.”

His additional advice for producers is to look at the feed-mitigant data and determine which product will fit your needs. “Then talk to your veterinarian and your nutritionists, because you’re going to get benefits along the way,” Dee added.

Podcast: Effect of formulating diets based on a STTD Ca:STTD P ratio and inclusion of phytase on Ca and P balance of growing pigs 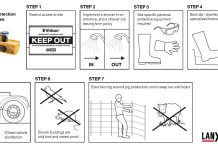 Check out these simple steps on how to effectively improve your farm perimeter biosecurity.