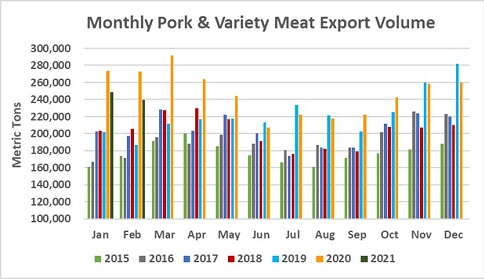 February exports of U.S. beef and pork remained below the rapid pace established in early 2020, according to data released by USDA and compiled by the U.S. Meat Export Federation (USMEF). However, exports were consistent with USMEF’s February projections and the federation still expects 2021 beef exports to increase substantially year-over-year, while pork exports are projected to narrowly surpass the 2020 record. ​ 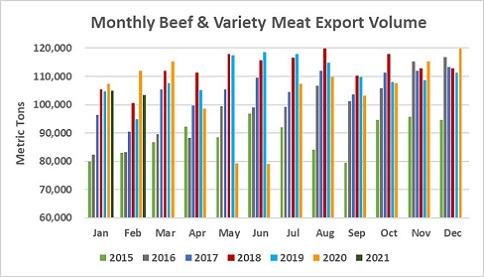 “While February exports were in line with expectations, the results don’t fully reflect global demand for U.S. red meat,” said Dan Halstrom, USMEF president and CEO. “Logistical challenges, including congestion at some U.S. ports, are still a significant headwind and tight labor supplies at the plant level continue to impact export volumes for certain products – including some variety meat items and labor-intensive muscle cuts.” ​

Halstrom notes that the flow of exports through U.S. ports is showing some gradual improvement as COVID-impacted crews move closer to full strength, but remains a serious concern for the U.S. agricultural sector. ​

“USMEF greatly appreciates the members of Congress and ag industry representatives who have worked to bring more attention to this situation, and the efforts of maritime regulators to address shipping practices,” he said. ​

Export demand has remained solid despite logistical challenges and other pandemic-related obstacles. Continued international demand, along with robust domestic business, contributed to stronger cutout values in the first quarter, which were up an average of 27% year-over-year for pork (nearly $90/cwt) and 4% for Choice beef ($224/cwt).

The surge in beef exports to China continued in February, reaching 8,644 mt valued at $66 million – far above the minimal levels posted a year ago and making it the fourth largest destination for U.S. beef. Through February, exports were more than 1,000% above last year’s pace in both volume (16,506 mt) and value ($124.1 million). Beef exports to China already exceed the full-year totals reached in 2019, prior to the U.S. securing expanded beef access through the Phase One Economic and Trade Agreement.

February beef exports to South Korea were slightly above last year’s strong totals, pushing January-February exports to 44,892 mt, up 9% from a year ago, while a 10% increase in value ($328 million) established Korea as the value leader for U.S. beef exports in early 2021.

Korea surpassed perennial value leader Japan, where exports felt the impact of an annual import safeguard established in the U.S.-Japan Trade Agreement. While the higher safeguard tariff rate (38.5%) on beef muscle cuts was not triggered until mid-March, importers’ efforts to manage the safeguard likely impacted February shipments, which were 8% below last year at 24,879 mt, valued at $165.1 million (down 4%). Through February, beef exports to Japan were 10% below last year’s pace in volume (46,897 mt) and down 8% in value ($303.1 million).

Japan imposed the higher tariff rate on March 18. It will remain in effect for 30 days, when the rate declines to 25% – the same rate that now applies to beef cuts imported from Japan’s other major suppliers. As prescribed in the trade agreement, trade officials from the U.S. and Japan have begun consultations on possible adjustments to the safeguard.

Other January-February results for U.S. beef exports include:

Pork exports climb to the Philippines and Central America; strong rebound in Colombia