South Korea has been successful in minimizing the spread of contagious animal disease by building up a bolstered, preemptive livestock disease control system over the past few years.

“Though many wild boars in the inter-Korean border areas have continued to be infected with ASF (since 2019), only two cases of the disease were confirmed at local farms in 2020,” said an official of the Agriculture Ministry.

When the two cases were reported in Gangwon Province’s Hwacheon in October 2020, the ministry issued a 72-hour standstill, under which vehicles and farmers at the farm were banned from moving to the other areas. Aside from hogs at the farm, those at neighboring farms were also culled simultaneously. 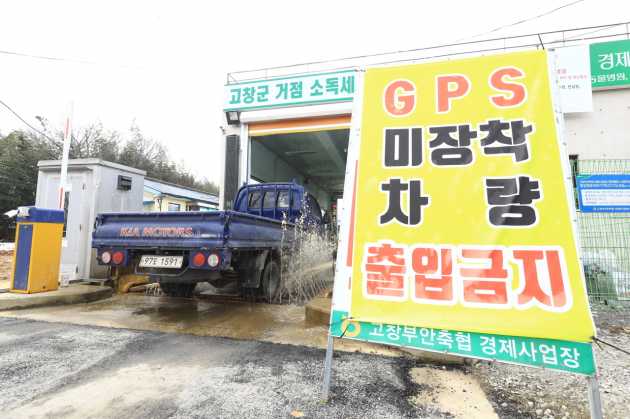 A vehicle is sterilized to prevent the spread of foot-and-mouth disease in Gochang, North Jeolla Province, in 2019. (Agriculture Ministry)

This could prevent the animal epidemic from spreading to other regions. Many industry insiders shared the view that the first outbreak of ASF in Paju, Gyeonggi Province, in September 2019 and the following spread could have been due to the city’s close proximity to the North, where the outbreak of the virus was reported in May 2019.

Since late 2019, intensive captures of wild boars and searches for carcasses have been carried out actively, and over 1,054 kilometers of fencing to block the movement of wild boars has been installed.

The routes from the ASF outbreak point in the border region to the farm and around pig farms nationwide are being sterilized every day, and the disinfection and disease controls on pig farms are constantly being checked.

In addition, a “Livestock Environment and Disinfection Day” is held to guide and inspect farm workers, remove rats and pests and disinfect every Wednesday.

In November 2020, the ministry designated 18 cities and counties in Gyeonggi Province and Gangwon Province as part of a district for intensive management of ASF. Farms in the district have been obliged to set up eight kinds of disease control facilities, such as rooms for carcasses and fences to block the entry of vehicles.

The ministry has also alerted hog farmers by issuing a caution during periods where animal virus risks ar. An example was the caution issued in July and August 2020, as ASF could be spread to local farms via waterways in the wake of heavy rainfalls in the inter-Korean borders.

ASF is a highly contagious hemorrhagic fever in pigs and can be spread via fomites and uncooked pig products.

Hog farm owner, Lee Joon-gil, in Gyeonggi Province’s Yeoncheon said he had been able to resume raising hogs after culling his livestock when ASF hit the nation in September 2019.

“To raise pigs again, I closely coordinated with the government over the guideline to establish eight kinds of facilities,” he said. “I was able to reopen the farm after 14 months because I strictly complied with the state-led disease control guidelines.”

Of the nine provinces and eight major cities including Sejong and Busan, 16 regions had hog farms — all except Seoul. There were more than 6,000 hog farms across the country.

This is in contrast to Europe, where the tally for AI cases recorded a 70-fold surge in 2020 from a year earlier, and Japan, which saw the number of cases reach an all-time high during the 2020-2021 period, ministry data showed.

The authority has pushed for sanitization of habitats for migratory birds by conducting disinfection activities every day for a certain period.

Aside from disinfection vehicles, drones were used for sterilization of the habitats and farms, while tourists were also barred from entering the habitats, where the AI antigen was detected.

Poultry farm owner Yoo Jin in South Chungcheong Province’s Cheonan had to cull all of his egg-laying chickens between 2014 and 2015 because his farm neighbors Bonggang Stream, a habitat for migratory birds.

Yoo, who has recently resumed farming in accordance state guidelines, said that “the disinfection by drones, offered by authorities, was effective there.”

The disease control authority now carries out foot-and-mouth vaccinations for cows, pigs and goats at farms nationwide twice a year — in April and October. Additional vaccination was offered to farms in 16 inter-Korean border areas and five districts off West Sea.

Most vaccines being used currently contain oil-based vaccine adjuvants and have limitations. It takes a long time to induce antibodies after the vaccination.

“To overcome the current technological limitations, the quarantine agency developed a novel, immune-potent, adjuvant for FMD vaccines which induce cellular and humoral immune responses simultaneously for increased immunity, and have broader spectrum of defense against various food-and-mouth viruses,” said a ministry official.

Agriculture Minister Kim Hyeon-soo quoted by a news outlet, as saying that “disease control should be conducted in an excessive manner. Control is impossible when the virus penetrates an artery.”

Kim stressed that the systemization of the preemptive measures was the most important way to root out the virus in the initial stage.