R2 is a blend of short, medium and long chain fatty acids derived from proprietary processing of lipid raw materials. R2 provides nutrient-dense source of essential fatty acids, free fatty acids and organic acids designed to provide nutrition and to control harmful bacteria in the feed. The objective of this collaborative research done at VMPM and VDL, Iowa State University was to determine the effects of R2 products on Salmonella control in a contaminated feed measured by culture plates and quantitative real-time RT-PCR.

The first in vitro study shown in Figure 1 was agar dilution assay reflects the analysis of the potential antibacterial properties of R2 product on growth of selected bacterial pathogens. The pathogens chosen for the analysis were based on strains that cause disease in animals being both Gram positive and negative, and these were sourced from a range of sources including diagnostic strains and ATCC. All strains were grown under their optimum conditions to ensure adequate growth for the assays.

All oil plates were made using the same approach. The oils were incorporated into Mueller Hinton agar for the assay by suspending the oil in the agar and pouring into sterile petri dishes. Oils were added as weight per g where, the initial concentration was known. Bacterial cultures were grown overnight on non-selective media and colonies picked and adjusted to a 0.5 McFarland standard (1.5 x 10^8 CFU/mL per strains) using a nephelometer. Concentrations of the diluted bacteria were inoculated on the plates by streaking using a 1ul loop. All plates were incubated as required for optimum growth under aerobic, anaerobic or microaerophilic conditions. All plates with the oils were incubated at the optimum growth temperatures of the strains i.e. 30, 37 or 42C. 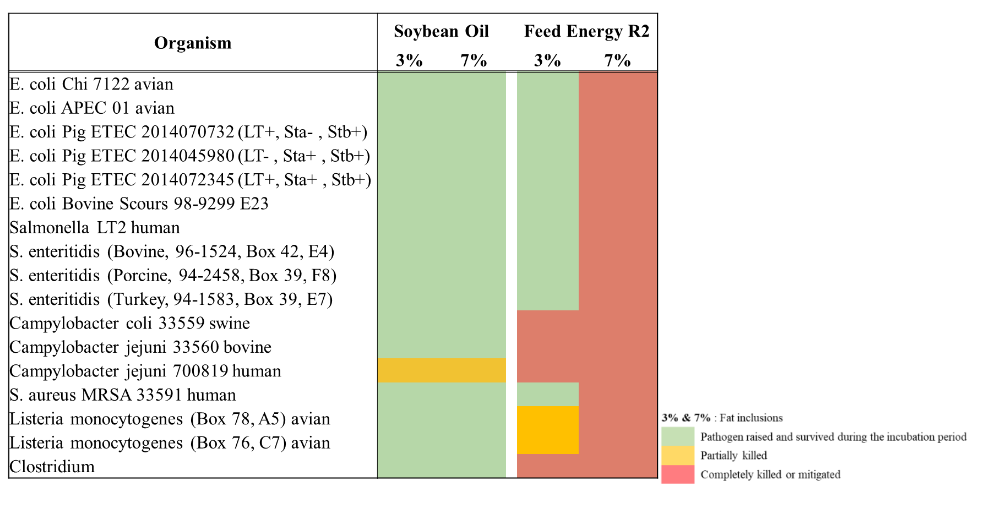 The feed in vitro study shown in Figure 2 was tested the growth of Salmonella enteritidis in the feed treated with R2 product. There were 4 treatment groups including a positive and negative control with 5 time points.

Turkey Stater Feed used in this study was obtained from a manufacture and stored at 20°C until use. The same batch of feed was divided into 5 groups (roughly 2 lbs for each group). The moisture of the feed for each group was adjusted to 12% using nuclease free water. The groups #1 (negative control) and #2 (positive control) were not treated with any product. The feed in groups #3 and #4 were treated with R2 product and thoroughly mixed.

Before starting this procedure for each of the treatment groups, 3×20 grams of feed was collected and sent for Salmonella testing to verify that these feed samples are Salmonella negative. On the morning of the testing day, for each group, 120 grams of feed was weighed and added to one 500ml sterile bottle. The bottle of feed in the Group #1 was spiked with 5 ml TSB mixed thoroughly to ensure that the feed and TSB is mixed evenly. Follow the same approach to spike feed with Salmonella (4.0×10^7) in the Groups #2 – #4 (4 ml of TSB + 1 ml of Salmonella culture + 120 g feed for each bottle). Changed the syringe and gloves between groups. At the time point 0h (immediately after TSB or Salmonella spiking), 2 x 10 grams of feed was taken from each treatment group and thoroughly resuspended in 30ml PBS in 50ml size tubes. After sitting at 4°C for 12 hours, the feed supernatants was harvested and made into two aliquots and sent for media culture and enumeration. All of the left aliquots were then stored at 4°C. To observe the growth and quantify of S. entertidis, 1ml of feed supernatant was enriched in 4ml of TSB 37°C for 24h. After incubation at 37°C for 24 h, two loopful (20l) of enrichment culture was streaked on XLD plates and incubated at 37°C for 24 h. In addition, 2ml of enriched culture was sent for Salmonella PCR.

Figure 2: Results of experiments testing the effects of treatment on S. enteritidis in feed. 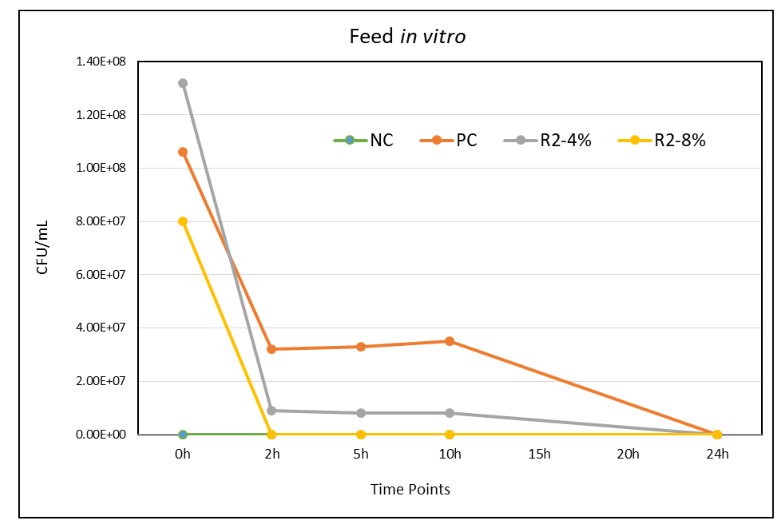 The results from the pre-treatment of feed with the R2 product is capable of reducing higher level of salmonella present in feed and reducing the risk of salmonella transmission via contaminated feed.