When weaned pigs are separated from the sow, moved  into a new environment, mixed with other litters, and offered only solid feed, they undergo a lot of stress. During a couple hours to a few days after weaning, feed and water intake are significantly compromised. On top of that, pigs also routinely face a high load of pathogenic bacteria, such as enterotoxigenic Escherichia coli.Together, these stressful factors will trigger several negative processes in the gut of the pigs, including damage of the intestinal wall and overgrowth of these pathogens. As a consequence, average daily gain is compromised and scouring is most likely to happen.

Scouring during the nursery phase can be caused by different factors, not merely by gut dysbiosis. However, diahrrea is a clinical symptom used to estimate post-weaning gut health in pigs. It is undeniably one of the most serious problems for the pig industry worldwide. As water represents a large proportion of a young pig’s body mass, the consequences of diarrhea range from severe dehydration to death. Mortality rates of up to 20-30%, impaired growth in the surviving pigs, as well as increased costs for medical treatments put significant pressure on farm profitability. Diarrhea thus makes the post-weaning phase a stressful time for pig producers too.

Tools to prevent post-weaning diarrhea: antibiotics to be used responsibly

Until recently, antibiotics were prophylactically administered to control post-weaning diarrhea. Today, however, we know that the excessive use of antibiotics contributes to the development of antimicrobial resistance (AMR). Studies have showed that bacteria that once developed resistance to a certain antibiotic will most probably transfer it to a broad range of other bacteria. Critical antibiotics such as those in the beta lactam class – used for treatment of multidrug resistant bugs – are at risk due to resistance genes found in bacteria isolated from pig farms (Mollenkopf et. al, 2017).

Besides AMR, a lot of pressure also comes either from final consumers or restaurant chains to reduce, control, and declare the amount and types of antibiotics used in livestock.

In these times, the use of antibiotics has to be strictly limited to necessary, therapeutic applications.  Pig producers, therefore, need to look for new solutions to prevent diarrhea, always with a view to increasing post-weaning performance.

Immunoglobulins from egg yolk are a promising solution

Sows’ colostrum and milk are the main source of several nutrients to the newborn-pigs, including antibodies (with the first one having much higher amount of these protective proteins than the latter). When properly managed, colostrum is highly effective in protecting newborn pigs against pathogenic diahrrea and avoiding its consequences. A similar strategy is aimed at weaning, via feed and using commercially available ingredients as the source of antibodies. The concept is defined as “passive immunization via feed” and has the goal of having antibodies available and active in the gut to support the still not fully developed pig immune system.

Studies have shown that certain egg antibodies can specifically support piglets after weaning and reduce the occurrence of diarrhea and mortality. They fulfill the task and will mainly act in the gut, where they bind to the pathogens and render them harmless. It is well know that hens transfer a foundational stock of antibodies against pathogens they encountered to the egg yolk (IgY). When a hen is exposed to gastro-intestinal pathogens, her immune system will produce relevant antibodies that are deposited in her eggs. These antibodies are effective even for diseases that do not actually affect chickens but are relevant for piglets. Therefore, when delivered as a functional, standardized egg powder-based product, IgY can effectively support young pigs’ intestinal health in critical and stressful situations.

Quantifying the effects of IgY on the performance of weaned pigs

A trial was conducted at a farm in the Philippines to evaluate the effect of different inclusion rates of an egg powder-based product (Globimax Jump Start, GJS; EW Nutrition) on the performance and health status of nursery pigs. 270 weaned mixed-sex PIC pigs weighing 7.35 ± 0.88 kg and averaging 28 days of age were housed in an open-sided, naturally-ventilated nursery with plastic elevated slat floors. They were divided into 3 trial groups (Table 1) with 9 pens (replicates) and 10 animals per pen. All animals were fed a standard two-phase feeding diet (28-42 and 43-70 days) based on vegetable ingredients (Table 2):

It was observed that the inclusion of GJS in the feed improved pig performance and health status in a dose-dependent manner. Compared to the control group, pigs receiving GJS had an additional total weight gain of approximately 3 and 5 kg, for the lower and higher inclusion rate, respectively (Figure 1). The extra kg lead to a numerically higher end weight at for both GJS pig groups. 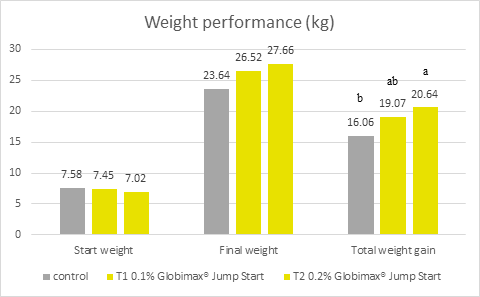 Pigs receiving Globimax Jump Start also had an improved feed conversion (0.3 to 0.5 for the 0.10 and 0.20% inclusion rates, respectively), once again dose-dependent, compared to control pigs. No difference in average daily feed intake (ADFI) was observed, which is an indication that pigs used the feed more efficiently from a gastro-intestinal point of view. 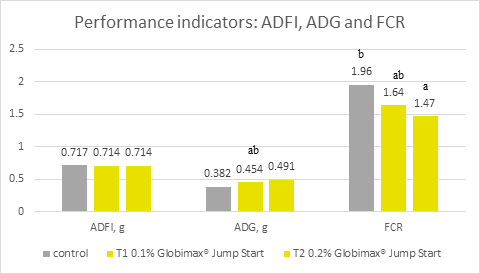 Mortality dropped in both Globimax groups compared to the control (Figure 3). The difference, although not significantly different, corresponds to a decrease of 83% on total phase mortality. The same was observed for the incidence of diarrhea: a 40% drop from 11.1% to 6.7% for the GJS groups. These results confirm the positive impact of functional egg immunoglobulins on pigs’ health status during the challenging post-weaning phase.

Figure 3: Incidence of diarrhea and mortality (%) 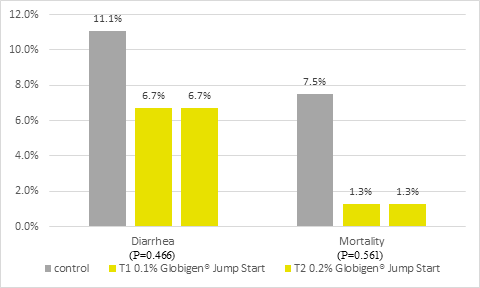 Better performance and health status generated impressive economic returns. Based on the feed costs per pig and the achievable live weight price per kg applicable to the Philippines at the time of the trial, the return on investment at an inclusion rate of 2 kg of Globimax Jump Start per ton of feed was estimated to be 4:1. Net income per pig, after costs for GJS, amounted to 300 to 400 Philippine Peso, which at current exchange rates equals 5 to 7 Euros or almost 6 to 8 US Dollars.

In times of antimicrobial resistance, the use of antibiotics – and particularly the use of last-resort antibiotics such as colistin –  has to be strictly limited to necessary, therapeutic applications, whose efficacy for human and veterinary purposes is threatened by a proliferation of resistant bacterial strains. However, this does not leave pig producers without performance-enhancing options.

The trial results clearly show that the selected egg antibodies contained in Globimax Jump Start effectively support weaned pigs’ gastrointestinal health, resulting in strong performance improvements. For farm profitability, it is however crucial that such improvements come at a reasonable cost. To that point, the trial results were indeed outstanding: 4:1 ROI and almost $6-8 net profit per pig. This indicates that Globimax Jump Start delivers its performance-enhancing results in an exceptionally cost-effective manner, helping farmers to sustainably raise healthier and heavier pigs.