The limited capacity for weanling pigs to secret HCl in the stomach may be exacerbated by inclusion of ingredients with high acid binding capacity such as limestone and monocalcium phosphate. As a consequence, reducing the amount of these 2 ingredients in diets for weanling pigs may contribute to a stable low pH for proper pepsin activity and increased action of microbial phytase. Inclusion of high doses of phytase that results in increased phytate degradation and increased release of Ca, P, and inositol may also be beneficial to newly weaned pigs. Therefore, an experiment was conducted to test the hypothesis that lowering dietary Ca and P reduces gastric pH and diarrhea of weanling pigs, but microbial phytase may overcome negative effects of low Ca and P on growth performance and bone ash.

A total of 320 weanling pigs (6.35 ± 0.87 kg body weight) were allotted to 8 corn-soybean meal-based diets in a randomized complete block design with 5 pigs per pen and 8 replicate pens per diet. Two phase 1 (d 1 to 14) control diets contained 100 or 50% of total Ca and digestible P relative to the requirement, and 6 diets in which 500, 2,000, or 16,000 phytase units per kg of feed (FTU) was added to each control diet were formulated. In the 6 diets that contained phytase, provisions of total Ca and digestible P were reduced by 0.16% and 0.11%, respectively, to account for the expected release of Ca and P by phytase. Common diets without phytase were fed in phases 2 (d 15 to 27) and 3 (d 28 to 42). Fecal scores were recorded in phase 1 and growth performance data were recorded within each phase. Plasma samples were collected from 1 pig per pen at the beginning and the end of each phase, and the same pig was used for blood collection throughout the experiment. From 1 pig per pen, stomach pH was measured on d 14 and the right femur was collected from one pig per pen on d 14 and 42. Data were analyzed using contrast statements in SAS. 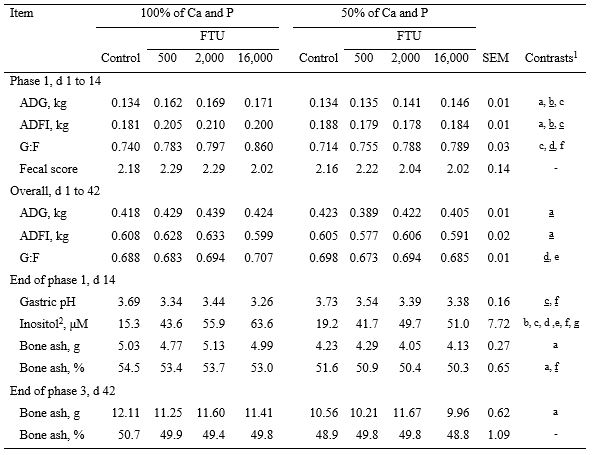 2Concentration of inositol in plasma samples. 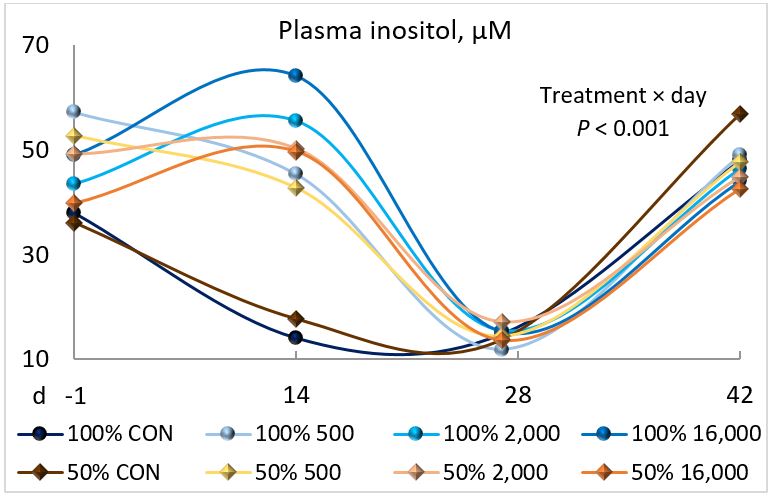