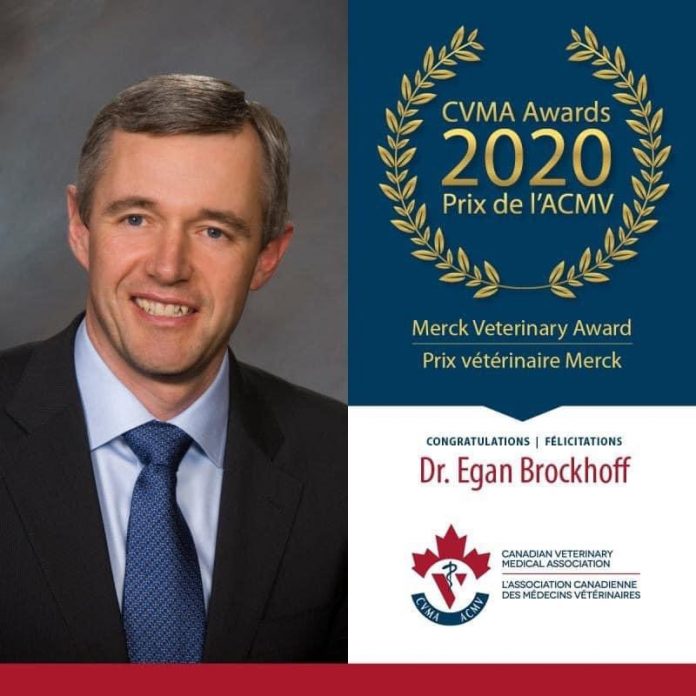 Congratulations to our own Dr. Egan Brockhoff on this well-deserved prestigious award!

In recognition for his veterinary career, Dr. Egan Brockhoff of Prairie Swine Health Services was presented with the Merck Veterinary Award by the Canadian Veterinary Medical Association.

“It’s pretty humbling when you realize your peers have come together and given you an award like that,” Dr. Brockhoff told Farms.com in an interview.

He plays an instrumental role in the ongoing development of the Canadian Pork Council’s (CPC) on-farm food safety and animal care quality assurance programs. He provides both scientific and practical advice related to codes of practice, research priorities, the CPC’s drug use policy and its national biosecurity standard.

Dr. Brockhoff’s expertise has been critical in the identification of measures designed to prevent and, if necessary, respond to an outbreak of African swine fever. His work in this space includes contributing to the creation and implementation of the industry government pan-Canadian ASF strategy. He has also made a substantive contribution at the international level working closely with colleagues around the world and with individual producers in Asian countries, where his expertise is highly valued.

“The Canadian pork sector would quickly notice Egan’s absence were he not so willing to help,” said John Ross, CPC’s executive director. “His contribution makes a great difference, and the pork sector is thankful for the role he plays in keeping the pigs safe and healthy.”

See here the official statement on this award from the Canadian Veterinary Medical Association:

The Merck Veterinary Award, established in 1985 and sponsored by Merck Animal Health, is presented to a CVMA member whose work in food animal production practice, clinical research, or basic sciences is judged to have contributed significantly to the advancement of food animal medicine and surgery, including herd health management. This year’s recipient graduated from the Western College of Veterinary Medicine, advocates strongly for the veterinary profession, agriculture, and agribusiness and operates a 3rdgeneration mixed farm in central Alberta with his family. He is a practicing veterinarian and president at the Prairie Swine Health Services in Red Deer, Alberta and Steinbach, Manitoba. He began providing consulting services in Asia in 2010, focusing on veterinary training, infection prevention and control, and enhancing biosecurity capacity. He has been teaching swine medicine at the University of Calgary — Faculty of Veterinary Medicine since 2008 and his passion for agriculture and supporting farmers and agribusiness brought him to the national stage in 2014 as the Canadian Pork Council’s Veterinary Counselor. Congratulations to the 2020 Merck Veterinary Award recipient, Dr. Egan Brockhoff! 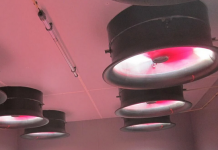