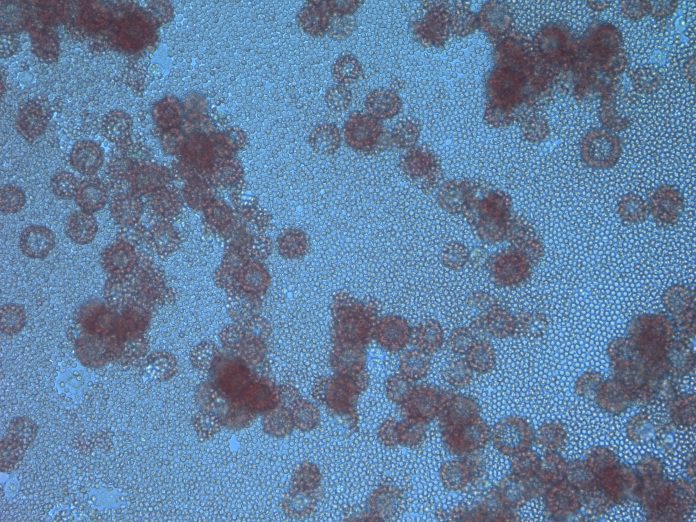 African Swine Fever Virus (ASFV) continues to spread in parts of Europe, Asia and Hispaniola, affecting domestic and wild pigs and causing massive economic losses. The Department of Homeland Security (DHS) maintains a proactive approach to transboundary animal disease (TAD) prevention through continued biosecurity research, development, testing and evaluation on topics focused on early detection, prevention, response and recovery if a TAD outbreak were to occur within the United States.

To do this, the DHS Science and Technology Directorate (S&T) and its Plum Island Animal Disease Center (PIADC) generate actionable datasets to answer relevant questions, such as “Can commercially manufactured disinfectants kill ASFV at farm facilities?”

Adherence to strict on-farm biosecurity protocols, including having a rigorous cleaning and disinfection program in place, is crucial to help stop the spread of ASFV. Contaminated objects, such as transport vehicles, tools, feed and feed ingredients, have been implicated as sources of potential virus transfer between farms. At present, there are few disinfectants available to combat ASFV that have been approved by the U.S. Environmental Protection Agency (EPA), and a large-scale outbreak could result in supply-and-demand issues. Expanding the number of EPA-registered disinfectant products with demonstrated efficacy against ASFV benefits swine producers, swine processing facilities, and other stakeholders.

DHS S&T PIADC recently tested commercial disinfectants currently in use by swine production facilities to determine their ability to kill ASFV dried on stainless steel and concrete, as those surfaces are commonly found on farms and in pork processing plants. The results, published in a report, demonstrated that two previously untested disinfectants performed exceptionally well. 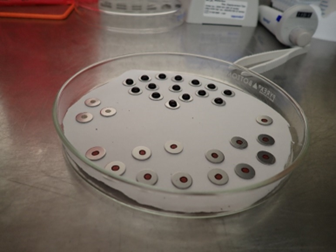 The PIADC team worked directly with swine stakeholders through the National Pork Board to identify routinely used disinfectants—including three that are not currently EPA-registered for use against ASFV. In total, five commercial off-the-shelf disinfectants were chosen for testing: Virkon™ S, Virocid®, Synergize®, Tek-Trol®, and Intervention®. Chemical-grade citric and acetic acids were also evaluated. The testing followed standardized methods published by the International Organisation for Economic Cooperation and Development, and involved exposing ASFV, dried on both stainless-steel disks and concrete cubes, to each disinfectant at the suggested concentration and contact time as specified on the product labels. Any remaining live virus was measured by tissue culture methods.

In the U.S., the EPA is responsible for reviewing efficacy data supporting registration of antimicrobial products. To be considered an effective virucide, a disinfectant must reduce live virus on a non-porous surface by 99.9%. PIADC used this 99.9% reduction as the cutoff to determine which products were effective. On stainless steel, solutions of Virkon™ S (1%), Virocid® (1:256), acetic acid (3%), and citric acid (3%) met the EPA standard. Disinfectant products registered by EPA are only required to demonstrate effectiveness on stainless steel; however, PIADC included porous concrete as a part of the testing to determine if there were any significant differences in product efficacy. When tested on concrete, only Virocid® and Virkon™ S inactivated ASFV past the 99.9% cutoff. 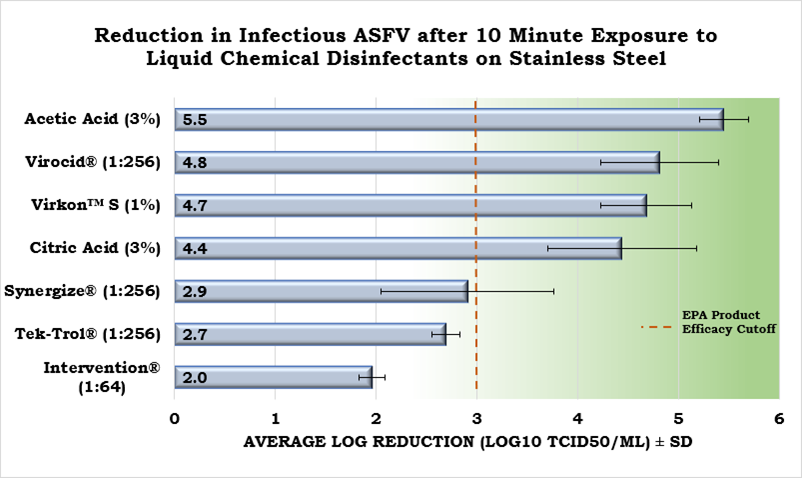 Of the seven disinfectants evaluated, Virkon™ S, citric acid, and Intervention®* are currently registered by the EPA for use against ASFV. Thus, PIADC identified two additional highly effective disinfectants for use on stainless steel – Virocid® and acetic acid, which performed equally well, or better, under the conditions tested.

Since the conclusion of testing, DHS S&T PIADC has worked with the U.S. Department of Agriculture’s (USDA) Animal and Plant Inspection Agency (APHIS) to submit efficacy data to the EPA in support of registration of Virocid® and acetic acid for use against ASFV. Virocid® has since been granted Section 3 registration under the Federal Insecticide and Rodenticide Act (FIFRA), and acetic acid has been approved for emergency use under FIFRA Section 18 Quarantine Exemption. Once accepted, products are added to the list of registered and approved disinfectants on the USDA APHIS website USDA APHIS | Disinfectants.

PIADC is currently testing slaked lime as another potential ASFV disinfectant on steel and concrete surfaces, at different temperatures and soil loads, and expects to have results in the near future.

*Intervention® was registered against ASFV using data obtained through testing via ASTM 1053E, and thus efficacy results may not directly compare with those obtained in this study. 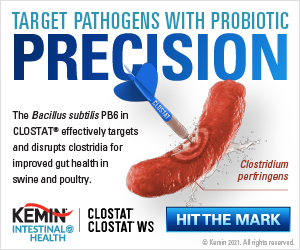