Sow mortality is a growing concern for pig farms in Canada. Clostridium novyi (C. novyi) is an anaerobic, spore-forming, gram-positive rod and ubiquitous bacteria in swine farms1 causing porcine infectious necrotic hepatitis leading to sudden death in sows2. The disease is peracute, with very little clinical signs before death. SUISENG® (HIPRA) is a sow vaccine that protects against neonatal diarrhea in piglets and sudden death caused by C. novyi in sows. This field trial assessed the reduction of sudden death on a Canadian farm after a vaccination program using SUISENG®.

A farm trial was carried out on a 2500 sow farm in Saskatchewan (Canada), with a recent history of high sow mortality. In August 2016, the farm began using SUISENG® vaccination following the manufacturer’s instructions. Sows were vaccinated with SUISENG® (2ml IM) at 6 weeks and 3 weeks prior to farrowing. A booster dose was given 3 weeks prior to each subsequent farrowing. Overall sow mortality and sudden death sow mortality rate were recorded every two months from February 2016 until May 2019. To analyse the results for the statistical analysis, the data was classified into two different periods. For the period A (from February 2016 to July 2016), the sows remained unvaccinated against C.novyi. On the other hand, Period B encompassed from February 2017 to May 2019 when all sows on farm had been immunized. 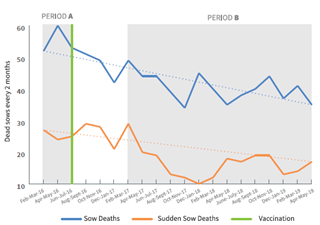 Sow mortality is a growing concern on pig farms. There are multiple causes behind it, including sudden sow death due to C. novyi.

It is remarkable to highlight the importance of having a good diagnosis of Clostridia disease, because these results demonstrate the importance of the implementation of a vaccination program against Clostridium novyi as a primary measure to reduce the incidence of sudden death3,4. This farm trial showed that SUISENG® vaccination could reduce sow mortality on farm.