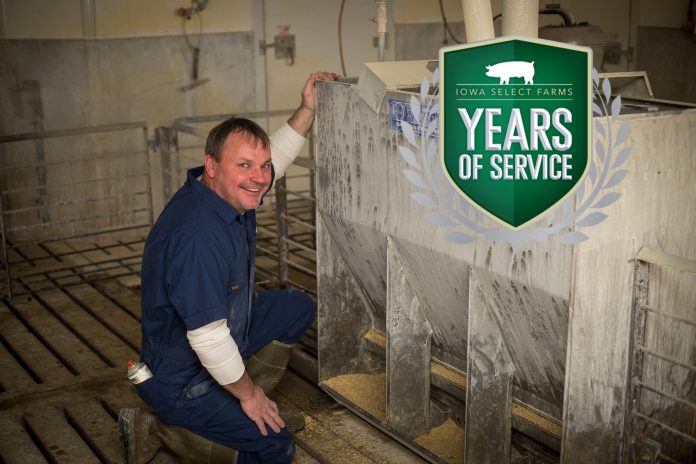 Congratulations to Jason for celebrating 20 years with Iowa Select Farms!

It might come as a surprise to learn that other than being married to the 1992 Iowa Pork Queen, Jason had no experience with pigs prior to working for Iowa Select Farms; in fact, his degree was in auto-mechanics and he thought working as an entry-level animal caretaker would only be temporary. Turns out, Jason absolutely loved the job and as most of these stories go—that was 20 years and many promotions ago.

Jason’s first job was at a wean-to-finish farm near his hometown of Wall Lake. A few years into the job, he was promoted to farm manager and for the past 15 years has worked as a finishing supervisor. Currently, he oversees 24 farms and a team of 12 managers.

“The people are really my favorite part of the job,” he said. “I get to work alongside a great group of growers and help them learn how to be successful. It’s very rewarding.”

In fact, Jason has always found the job rewarding. “I can honestly say that if you would have asked me twenty years ago if I’d still be working at Iowa Select Farms that I would have said ‘yes’,” he said.
“I loved the job, the people, the variety of work and what the company stood for. We’re always helping others in need.”

But back in 2010, Jason was the one in need. A massive ice and snow storm rolled through his production area, knocking out power at several of his farms. “Electric poles and lines were down and eleven of our sites were without power,” he recalled. “It was a mess.”

Without skipping a beat, Iowa Falls’ Doug, Shannon, Ardy, Brian and Bob all hit the roads with their trucks and generators in tow. For several days, the Iowa Falls-based crew stayed at Jason and Jason’s parents house while they care for animals at his farms, ensuring no animal ever went without food or water, and keeping generators running until power was restored.

“We’d leave early in the morning and get back late and night, but my gosh, I can’t tell you how much I appreciated those guys coming to help,” said Jason. “And you know what? I would have done the same for them. That’s just what we do at this company. We’ve all got each other’s backs.”

In twenty years, Jason has experience changes firsthand, like farm expansion, new builds, design and technology. Heck, one of his farms is F053 and another is F940. “Seeing the difference in the style of farms, technology and how advanced they’ve become is pretty cool,” he said. “Our farms today are well-equipped to help both us and the pigs succeed. I can check barn temps, water usage, death loss and other important things without even going into the farm. It’s amazing how much things have changed, for the better, in the last twenty years.”

Outside of work, you can find Jason spending time with his three kids, Riley, Jake and Courtney, hanging at the race track or in the shop with his working on the cars that his boys race with. He enjoys taking snowmobiling trips to the Black Hills in the winter, spending time on the lake in the summer and going to the local Mexican restaurant every Friday or Saturday night, no matter the time of year.

Now with twenty years under his belt you’d think Jason was ready to start slowing down, but he’s more motivated than ever to help him and his team succeed. Last year, he was named Most Improved Finishing Supervisor.

“These last twenty years have brought on a lot of change and memories,” he said. “But I can tell you I’m so excited about the future and more years with the company. I can only imagine what’s in store.”

Congrats on the continued career success, Jason! We are proud to have you on our team. 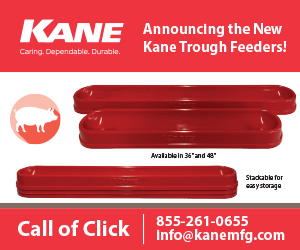