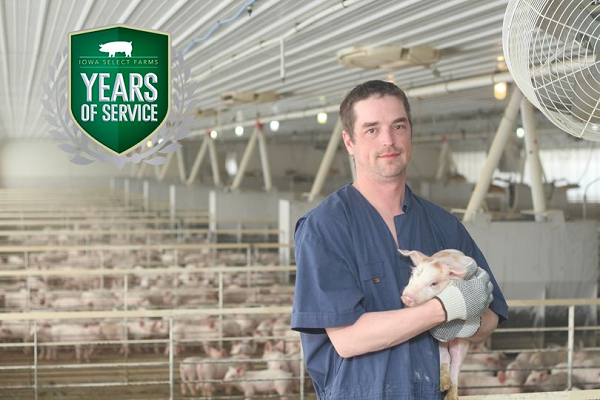 “The people I work with every day are outstanding,” says Darl. “I never have to worry about calling someone on the weekends or the middle of the night when there is a problem at a farm. They’ll answer, and then show up to help.”

Darl’s been a finishing supervisor for four years. Before that, he worked at Stockdale Sow Farm as a breeding department head. He says he likes that Iowa Select Farms is a place where you can completely switch your job up and try out another area of the company, like moving from a team of 12 under one roof to managing 22 finishing farms throughout Franklin and Butler County.

For starters, he says he appreciates the change and evolution of technology, access to data and overall efficiency in how they approach their day.

Darl says the technology, like alarms, computers, sensors, computers and other innovations, have increased the speed at which managers, veterinarians and supervisors can access data. Information that helps them get to the right farms at the right time.

“Pork production hasn’t gotten any easier,” says Darl, who pointed out the challenges are still hard to overcome, and animals still require a lot of care. “But we’ve all gotten better.”

Darl says he can access reports that help him map out the farms he needs to focus on in a given week based on the data he sees in the reports.

“We can prioritize and deliver better support to our managers and overall care. “It’s been great to be a part of the improvement and see firsthand the impact,” he said.
Darl says he wouldn’t change a thing about his 15 years here.

“Everyone here tries to bring their best every day,” said Darl. “As I said, the job isn’t easy, but I’m grateful for the team I have around me. I can’t ask for anything better.”