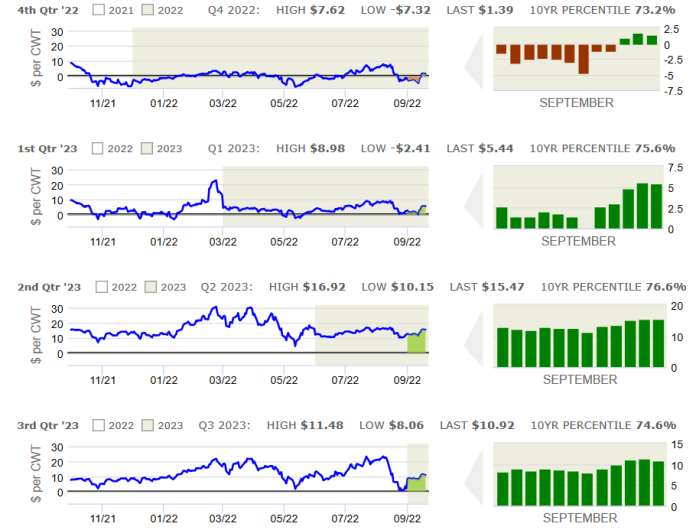 Margins improved over the first half of September as hog prices surged making new contract highs in deferred months while feed costs held relatively steady but remain firm. USDA released the September WASDE report which confirmed lower projected yields for both corn and soybeans. Corn production was lowered 415 million bushels from August on both lower yield and harvested area, with soybean production reduced 152 million bushels on similar cuts to both harvested area and yield. Continued declining crop condition ratings combined with a warmer late summer to the growing season is helping to keep risk premium in the feed markets ahead of harvest, particularly for the soy complex. Hog prices have risen on export optimism despite year-to-date statistics confirming that higher prices and a strong U.S. dollar have hurt pork exports this year. Total exports of fresh, frozen, and processed pork in July were 162,675 MT, down 6.1% from last year with total export value of $520 million likewise 4% below a year ago. Through July, pork export value of $3.562 billion was $672 million or 15.9% lower than a year ago while the volume of pork exports for the year is down 17.2% from the same period in 2021. Outstanding export sales to China hit a recent high point last week at 28,632 MT, the highest weekly value since April which may indicate seasonal buying to come. Chinese domestic hog and pork prices have risen recently, renewing the likelihood that China will release strategic pork stocks into the domestic market to maintain price stability, and later look to rebuild those supplies through renewed imports. Our clients have benefited from recent adjustments to add upside price flexibility to existing hog positions, while considering targets to add new margin coverage in deferred marketing periods.