Margins deteriorated over the first half of October as a drop in hog prices more than offset the savings from steady to weaker projected feed costs, particularly in nearby marketing periods. CME hog futures have been pressured recently from lower trade in both the pork cutout and cash hog market. The pork cutout has declined around $20/cwt. from the highs posted earlier this summer while negotiated cash hog prices are down around $5/cwt. so far in October. While hog slaughter last week was down 1.8% from a year ago, harvest weights are starting to creep higher as more new-crop corn enters feed rations. In the past two weeks it is estimated that overall hog weights (both producer and packer owned) increased 2.3 pounds or 1.1% from two weeks prior. This is more than double the rate of increase from both last year and 2019 for the same time frame and suggests that producers are maybe starting to get less current in their marketing. USDA released the October WASDE report which increased both corn and soybean production forecasts and ending stocks which pressured the feed markets. Corn yield was raised slightly from September to 176.5 bushels per acre, with production now estimated at 15.019 billion bushels and ending stocks pegged at 1.50 billion bushels. The soybean yield forecast was raised to 51.5 bushels per acre with production now estimated at 4.448 billion bushels and ending stocks pegged at 320 million bushels, with much of that increase coming from higher beginning stocks. For hogs, USDA lowered their pork production forecasts for Q4 and Q1 by 4.5% and 4.3%, respectively, from their previous estimate in September. Our clients have benefited from extending margin protection recently following strengthening margins while continuing to look for adjustments on existing positions. 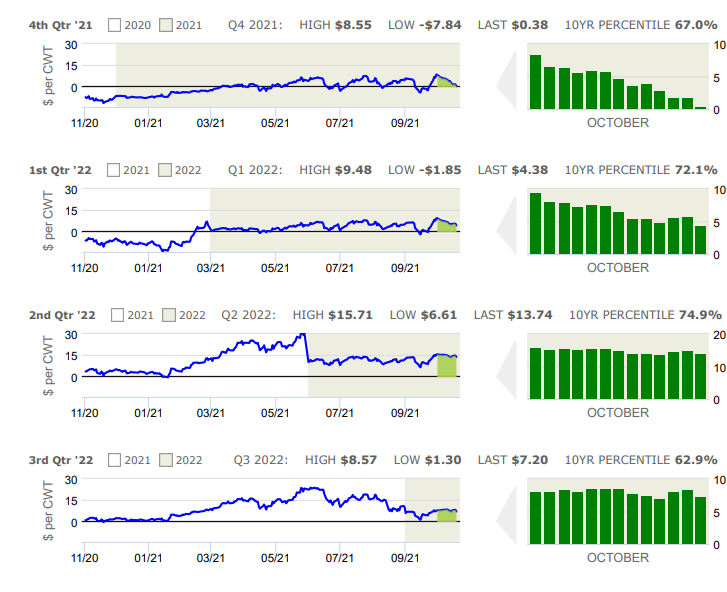