Margins strengthened over the first half of May as a selloff in the corn market more than made up for lower trade in hogs. The cash hog market continues to be tight and is expected to remain so through summer, although trends are uneven across the Midwest. A third wave of Covid-19 across Canada has led to a surge of hogs moving south of the border for processing with Canadian packing plants forced to cut their production schedules. As a result, the Eastern Corn Belt has been under a lot of pressure relative to the Iowa/Southern Minnesota area, and this can be seen in the discrepancy between Iowa/Southern Minnesota and national negotiated base prices which have reached new
highs around $5/cwt. Pork export sales meanwhile have started to slow down, particularly to China, although strong domestic demand continues to support pork cutout values. Pork export sales last week totaled 14,700 MT, down 69% from the previous week and 25% below the prior four-week average. Sales specifically to China totaled 3,000 MT including cancelations of 1,600 MT. Pork cutout currently at $116.57/cwt. is the highest so far this year and about $1.50 higher than this same week last year. It is also the highest value since 2014 which peaked the week of July 12 that particular year at $136.11/cwt. The feed markets sold off significantly over the past week led by corn which dropped more than $1.00/bushel in nearby futures. While not as dramatic, nearby soybean meal has likewise dropped about $40/ton recently. Our clients have benefited from previous strategic adjustments on existing positions to extend downside price flexibility on feed hedges, and
are now taking advantage of the recent break in price to remove upside caps on coverage should corn and soybean meal resume their uptrend later in the season. 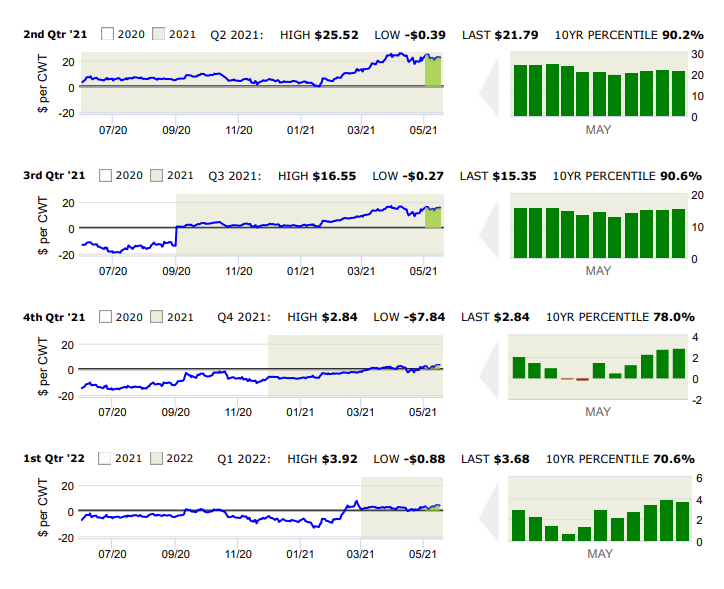