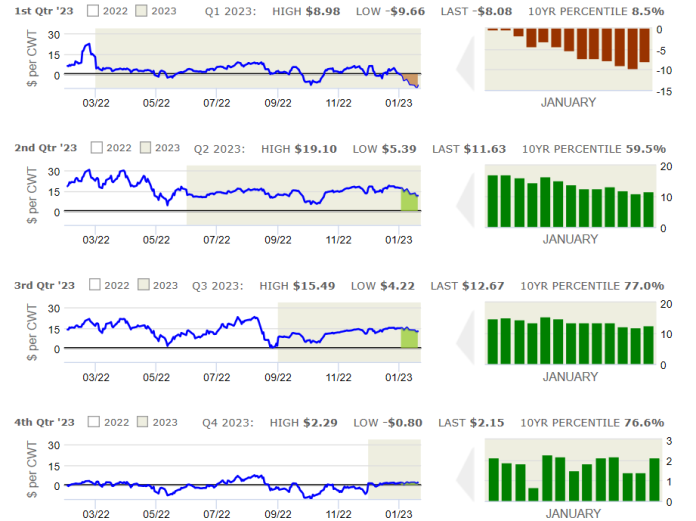 Margins deteriorated sharply over the first half of January following a steep drop in hog prices while projected feed costs were steady to higher. Hog futures are down around 13% since the beginning of the year and have been pressured by a combination of weakness in both the cash hog market and pork cutout. The disruption from winter storms in the Midwest and two holiday-shortened weeks caused hogs to get backed up. The average weight of producer-owned barrows and gilts jumped 3.7 pounds from just before Christmas to year end. While weights appear to have peaked it will take a few weeks of robust slaughter to catch up while demand concerns begin to build. The pork cutout is down around 5% since the start of the year and at its lowest value since January 11, 2022. Weakness in bellies has been a big weight on the pork cutout as belly prices are down 35% from last year with freezer supplies swelling. Around 70% of demand for bellies is foodservice which is typically slow at this time of year and belly stocks in Cold Storage are likely to continue growing. USDA updated pork supply and demand estimates in the January WASDE report, revising pork production higher for the first three quarters of 2023 while revising it down in Q4 relative to previous estimates. Q4 production is expected to be up almost 300 million pounds or +4.3% from last year, implying that the USDA is expecting a big jump in the breeding herd as of March 1 and much higher Sep-Nov farrowings as well as a larger pig crop than the last report suggested. USDA is forecasting total pork production for 2023 at 27.495 billion pounds, up 485 million or 1.8% from last year. Our
clients continue to target levels for adding new margin protection in deferred marketing periods with flexible price strategies.