Margins were relatively flat over the first half of June as a selloff in hogs and the feed markets were largely offsetting. The hog market is starting to wobble as high prices appear to be denting demand, which remains strong overall, particularly in the domestic market.
Consumer spending on food at retail has stayed remarkably resilient even as the pandemic abates and the economy begins to reopen more. The latest retail sales data showed May sales on food at grocery stores totaled $65.997 billion following April sales of $65.2 billion.
The May figure was the second highest on record after the panic buying in March 2020 as the Covid-19 shutdown began. Meanwhile, May sales at foodservice outlets hit an all-time high at $67.282 billion, up 1.8% from April and 71% higher than last year. There has been
concern that a reopening of foodservice operations would cannibalize on retail food sales, but so far this has not been the case. On the export front, pork sales and shipments to China have slowed down significantly in recent weeks, and the U.S. has quickly moved from the cheapest supply source on the global pork market to the most expensive at the same time that hog and pork prices are plummeting in China. On the feed side, both the corn and soybean meal markets have come under pressure recently as updated forecasts suggest more precipitation and a moderation of the recent heat wave. All the same, crop condition ratings have been declining and a significant acreage report looms at the end of the month. Our clients are looking to strengthen feed coverage on the current break while adding greater flexibility to hog hedges following their price decline. 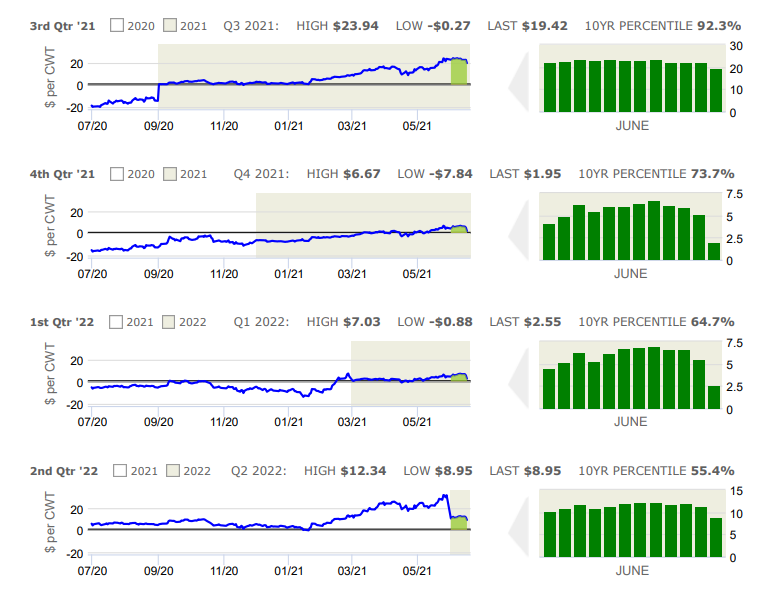 A Look at U.S. and EU Pork Exports, and Chinese Pork Demand