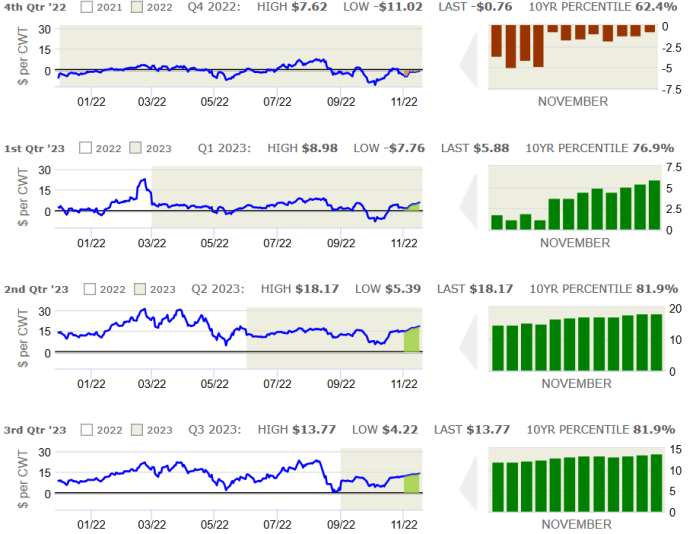 Margins improved further over the first half of November on a continued firming in hog prices while feed costs moved lower. Reduced hog slaughter and static harvest weights relative to both last year and expectations have helped to support cash hog prices and producer margins. In the four weeks ending November 12, hog slaughter totaled 10.203 million head, down 187,000 or 1.8% below a year ago. The September Hogs and Pigs quarterly inventory report pegged the supply of hogs weighing 120-179 pounds at 14.073 million head, 1.2% below last year. This combined with the fact that slaughter weights are moving sideways and bucking the seasonal trend to increase at this time of year have been supportive for hog futures. The same September survey suggested that supplies will continue running about 1.5% below a year ago through February so this may continue to be a supportive feature for the market. USDA’s November WASDE report made some modest revisions to the pork balance sheet, revising 2022 pork production lower by 27 million pounds to 27.135 billion pounds which would be down 2% from last year. The import forecast for 2022 was lowered by 53 million pounds from the October estimate whileexports were revised up by 20 million pounds, but at 6.409 billion pounds, the figure would still be down 8.8% from last year following lower exports to China as well as a recent slowdown in exports to Mexico. Meanwhile, news that Ukraine and Russia agreed to extend the Black Sea export corridor deal has put pressure on corn futures. Our clients continue to target levels for adding new margin protection in deferred marketing periods with flexible price strategies.