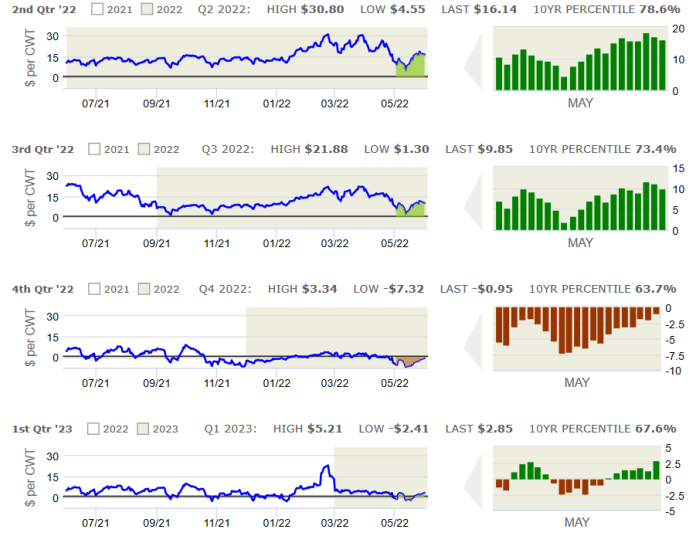 Margins improved significantly over the second half of May, particularly further out on the curve as a combination of higher hog prices and lower projected feed costs increased forward profitability. A pick-up in export demand recently has been supportive despite building pork freezer inventories and higher than expected slaughter runs which is further pressuring pork cutout prices. Pork export sales last week were strong at 36,703 MT, up 48% from the most recent four-week average as well as above the pace of shipments. Export sales to Mexico of 15,147 MT were up 55% from the four-week average with increased sales of bone-in hams likely behind that demand due to ongoing laborissues with further processing lines in U.S. plants. Net sales to China of 5,291 MT were also relatively good and about twice the pace of recent shipments despite being down from a year ago. Sales of 5,700 MT to Canada were also supportive. USDA reported a significant build of pork inventories in Cold Storage during April. Total pork inventories at the end of the month were estimated at 530.2 million pounds, up 16% from last year but still 9% below the five-year average. Inventories increased 9.1% from the prior month during April when on average there has been a build of about 2.9% over the past five years, with much of the increase due to more hams going into cold storage. Frozen belly inventories of 58.7 million pounds were also heavy, up 67% from last year and 6.7% above the five-year average. Hog slaughter meanwhile continues to run higher than expected, with total slaughter of 9.533 million head over the past four weeks only down 0.2% from last yearversus expectations of a 3% or more decline. Our clients have benefited from adjustments to add upside flexibility on hog hedges in margin management strategies.