Margins continued to strengthen over the last half of May as new highs in the hog market improved producer profitability while feed costs held steady. Strong demand continues to support prices as pork production continues increasing relative to both last year and 2019.
Commercial hog slaughter in April was estimated at 10.823 million head, 14.96% higher than last year and 2.3% above the more “normal” 2019. Pork production in April at 2.344 billion pounds was up 15.4% from last year and 3.3% above 2019 as larger hog carcass weights boosted domestic pork production. Despite this, USDA reported pork stocks in Cold Storage at the end of April down 26% from last year, with belly stocks particularly tight at 58% below year-ago levels. Picnics and butts are likewise tight at more than 40% below last year while pork loin inventories are 4% above April 2020. The industry was rocked over the weekend by news that JBS was hit by a cyberattack which impacted both their Australian and North American operations. While probably more of a factor for the cattle and beef markets, JBS still is estimated to account for 18% of total barrow and gilt slaughter capacity in the U.S., and there was news that that the Ottumwa, Iowa
plant will not be operating tomorrow. On the feed side, the corn market has recovered recently following forecasts that the Upper Midwest will be locked into a warmer and drier pattern over the near-term, with new risk premium being dialed into the market. Our clients have benefited from recent adjustments on existing positions to remove upside caps on feed coverage should corn and soybean meal resume their uptrend later in the season. 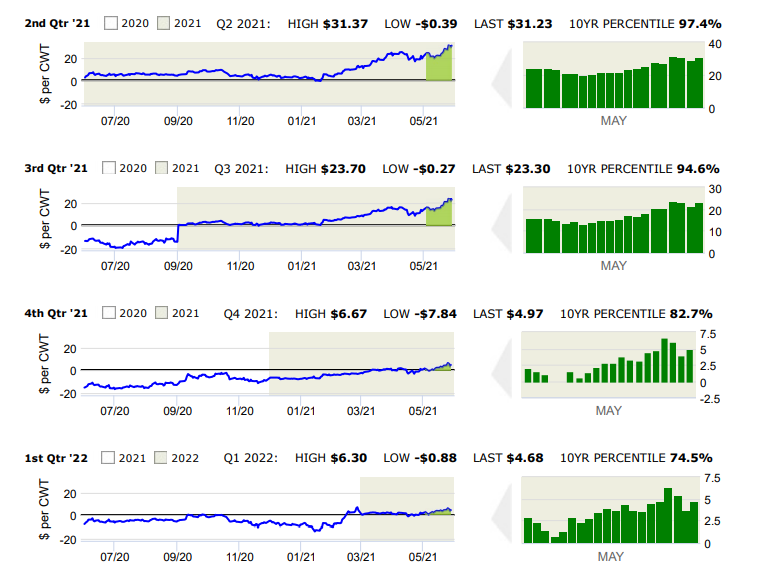