Margins further weakened to start the new year as hog prices retreated slightly while feed costs continued rising over the first half of January. While spot margins remain firmly negative, with only breakeven levels indicated through Q2 and Q3, optimism remains over the reduced breeding herd and continued strong export demand. November’s pork exports totaled 632.7 million pounds, up 1.5% from the previous year and a record for the month. November’s export total was paced by shipments to China of 167.8 million pounds (+6.9%), Mexico at 150.7 million pounds (+17.0%), and Japan at 104.2 million pounds (+5.5%). Combined, these three destinations accounted for 67.3% of total exports during the month, with the highest shipments to China since June and to Mexico since last January. Recent weakness in ham prices combined with strength in the Mexican peso relative to the U.S. dollar likely helped to boost exports to that market while renewed strength in domestic pork prices and the upcoming Lunar New Year probably helped accelerate shipments to China. Corn and soybean meal prices continue to trade firm although cracks are appearing in the building bullish foundation. Speculative interest measured by fund length according to the CFTC has reached over 435,000 contracts, a record high and a sharp rise from the plateau of around 300,000 contracts from
late October through mid-December. Similar length is evident in soybean meal, though not as extreme as is the case for corn. Both markets remain fundamentally supported by a surprisingly bullish January WASDE report from USDA which cut ending stocks significantly for both corn and soybeans. Our clients have been making strategic adjustments to existing positions while waiting for improved forward opportunities. 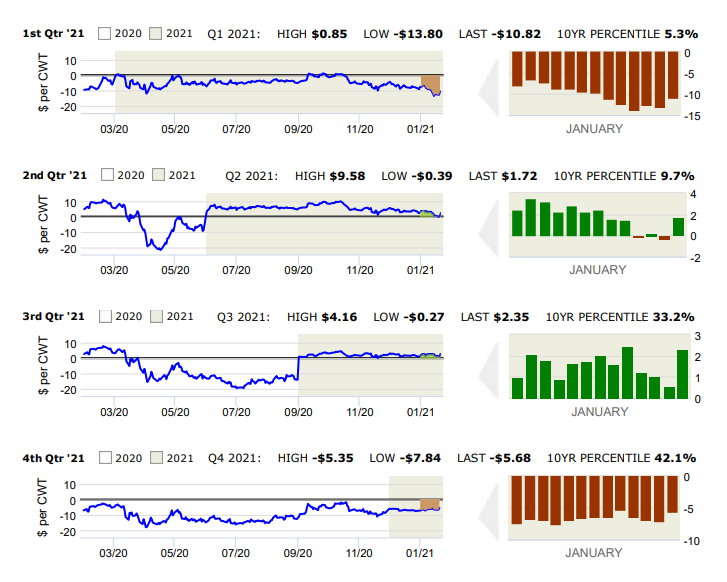