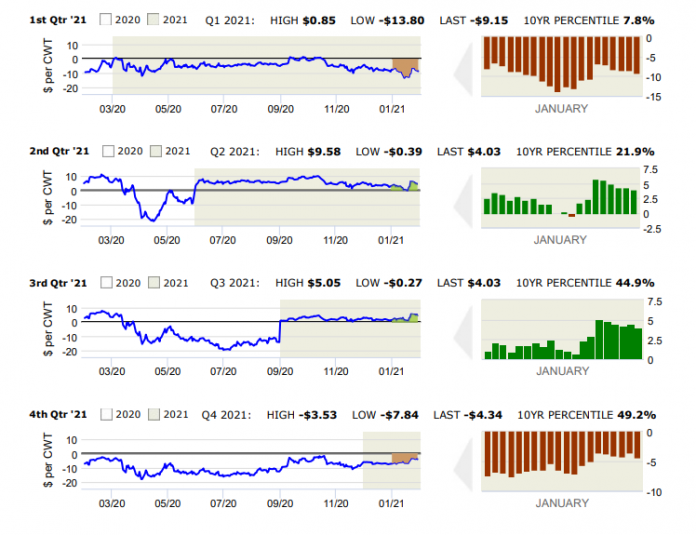 Margins improved over the second half of January as strength in hog prices more than offset mixed tones in the feed market with corn rising slightly while soybean meal declined. Both the cash hog market and pork cutout have displayed firmer tones recently with indications of improved demand. Pork exports last week were exceptionally strong at 52,900 MT, led by sales increases to Mexico (18,900 MT), China (13,900 MT) and the Philippines (6,000 MT). There was recent news of ASF resurgence in the Philippines that has caused the country to evaluate a significant reduction in pork import tariffs to curb runaway food inflation. Local pork retail prices have jumped more than 50% in
January from a year ago, and President Duterte has signed an executive order mandating price ceilings for pork and chicken in the capital region. In addition, Agriculture Secretary William Dar said pork imports may triple this year to 162,000 MT, and the Department of Agriculture is recommending pork imports under the minimum access volume (MAV) have a 5% tariff for the next 6 months and a 10% tariff for the following 6 months as opposed to the 30% import tariff currently in place. Similar tariff reductions are also proposed for pork imports outside of the MAV. USDA reported pork inventories in Cold Storage at the end of December totaled 408.36 million pounds, down 11.39 million or 2.71% from November and 29.65% below a year ago. The figure was also 21.4% below the five-year average. This came despite the fact that December pork production of 2.51 billion pounds was up 67 million pound or 2.7% from the previous year and the third largest monthly pork production on record. Our clients are positioning hog and pork hedges to provide greater upside flexibility while waiting for improved forward opportunities.