Margins continued to strengthen over the first half of February as higher hog prices combined with steady feed costs to improve forward profitability. Hog prices have been trending higher as weights continue to decline while strength in the pork cutout is providing support to the market. Since the beginning of the year, the average carcass weight of producer-owned barrows and gilts has declined 3.9 pounds or 1.8% and are now only 0.2% higher than this time last year. Packer-owned hog weights have also declined about 1.4% during this period but remain about 2% higher than a year ago. Meanwhile, wholesale pork prices are holding up quite well considering the total tonnage coming to market. The pork cutout value at $91.26/cwt. is currently up $12.49 or 15.9% since the beginning of the year and at its highest level for this point in the year since 2014 at $96.39/cwt. USDA raised their pork production estimate for 2021 in the February WASDE by 145 million
pounds or 0.5% to 28.724 billion pounds. The new projection would be up 1.4% from last year and 1.1 billion or 3.9% higher than 2019. No changes were made to the export projection from last month, which is forecast to be down 1.5% from a year ago but still 854 million pounds higher than 2019. With per capita pork consumption/availability the same as it was in 2019 at 52.4 pounds per person, exports will remain critically important this year to absorb increased production. 2020 total pork exports were estimated at 7.282 billion pounds, up 961 million or 15.2% from 2019 with China and Hong Kong accounting for 1.067 billion of that or 7.5% of all U.S. pork produced last year. Our clients continue positioning hog and pork hedges to provide greater upside flexibility while waiting for improved forward opportunities to extend margin protection. 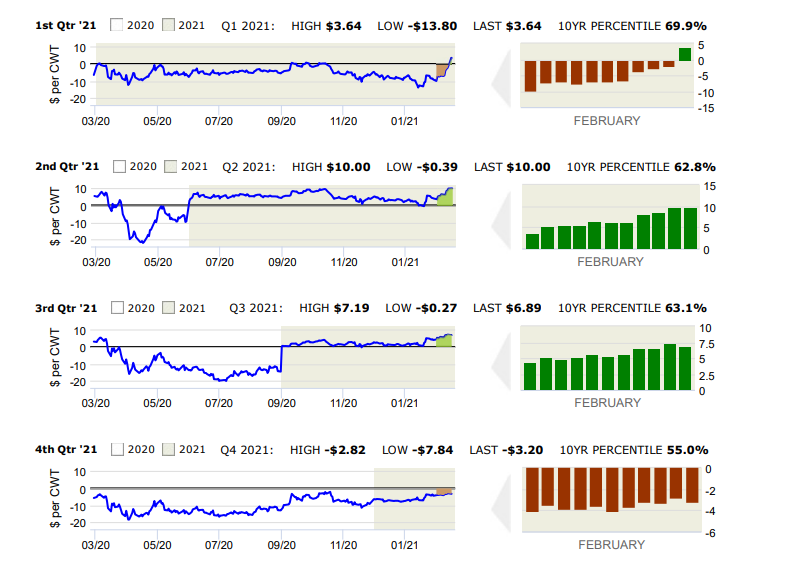